Rain and Mud? No Worries! 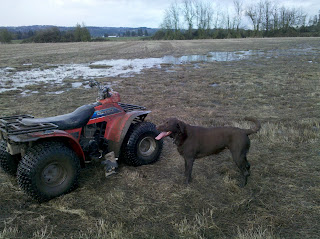 The rain has been here for what seems like months and today we were blessed with intermittent hail and snow.  Not the best weather for riding on two wheels.  In order to get our moto fix Trout and I took our time away from the daily grind to rush through fields of puddles and mud.   I have the luxury of acreage surrounding my house,  40 acres belonging to the landlord (Ivan the Great) and probably more than double that behind Ivan's field.  Since the 20 acres next to me is currently planted with winter wheat I've spent countless hours racing through the unplanted 20,  mud flying off the tires and Trout running like a crazy idiot through trenches made of rainwater.

She loves those moments in the day when it's just the two of us, the smell of the dirt and grime, the four wheeler splashing through puddles as the water nearly leaves us stranded.  Trout rushes ahead then comes back for me, happy to be allowed to run free through such conditions.

In years past I was riding the GS this time of year, but now I putt around in the company car, unable to find enough time in the day or week to ride more than just to the store.  It is these times on the four wheeler I am reminded of what I am missing.  The freedom, the wind rushing past your face, the smells radiating off the fields.

And it is times like these when I beg for spring to come, for summer to bless us once again.  In the meantime I'm starting to think about the next motorcycle trip that needs to be planned.  Perhaps southwest where the sun beats down?
- December 29, 2010 No comments:

Moto Speak: The Mice are Winning!


The Beast sits in the garage, mice trailing their way to it's precious pieces, as I watch the rain fall and the temperatures wane.  Remember summer?  Sweet summer with bright blue skies and warm goodness all around?  Oh how I long for summer!

It's been an uphill battle between the field mice, Trout and myself.  Winter isn't even officially here.  We have been battling over the Beast's territory...the large garage that must feel warm and inviting to the mice as their fields turn to mud puddles and the rain floods their underground homes.

After attempting various modes of mice destruction (bounce, moth balls and even electric noise makers) I slinked into despair as I laid out the poison boxes and waited for dehydration of the masses.  Ever aware that Trout is a labrador who enjoys eating anything and everything, the poison has been weighing on my mind and heart.  What if my Princess Trout were to eat some?  Would that be worth the price of a BMW that's mouse free?  Surely not.   Input from friends declared poison the clear victor, but still, I thought there must be something better and more humane.

After opening the back door and watching a mouse atop the screen door, staring down at me as we did a quick show down before he jumped down and scurried behind a chair, I vowed that whatever the cost the mice would leave my humble home.  Another friend and fellow blogger gave me a good tip:  electric mouse traps.  I rushed off to the store and picked one up for the steep price of $24.00.  I thought I'd give it a try on the back porch as that's where the last mouse villain I'd stopped seemed to be enjoying himself.  I followed instructions and put in four AA batteries and placed a small amount of peanutbutter in the trap.  I turned it on and went inside the house, sure that the electric trap would be my salvation.   A couple hours later I stepped outside to a blinking green light, which meant the trap had caught it's first victim!  Elated, I opened the trap and took tally for the night.  Mice: 0.  Me: 1.

I reset the trap and went to sleep, blissful that finally my mouse problem would be gone and the Beast would be safe once again.   Excitement purged through me and at midnight I crept outside and was elated to find I'd scored another win!  Mouse number two lay still in the trap!  Mice: 0.  Me: 2.  I reset the trap and drifted off to sleep knowing full well that I had finally found the perfect solution to all my woes.  When I awoke, to my disappointment, no mice had found my trap.  Still, I thought it worked well so I moved it into the garage near the Beast. 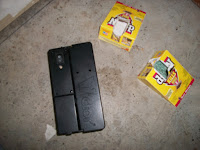 Today I donned my warm weather gear and walked out to the detached garage.  The first couple days of hunting I failed to kill any mice in the garage.  That would mean I'd only killed two mice, at approximately $12 bucks each given the price of the trap.  But still, I kept the faith.  It's been at least a week since I checked the trap.  I opened the garage door and expected to see the flashing light that would notify me of my victory.  Instead I saw nothing.  A still trap, an empty box of poison and another full box by it's side and a garage floor still littered with Bounce dryer sheets and moth balls.  And a Beast, still ashamed and wearing a pair of black panty hose filled with moth balls around it's middle.  The injustice of it all.

Hmmm, I ponder now, do I buy another electric trap?  Is there some type of special scent mice give off when they are electrocuted?  Why don't the moth balls and Bounce sheets work?  How long must the Beast wear panty hose and suffer the indignities?  Are country mice just smarter than city mice?  Clearly all the mice are smarter than I.

Here I am, beaten by the mice again.  A cat is starting to look better, day by day.  Now if only I can find one who doesn't eat, poop, walk on cars, sleep on motorbike seats, shed, go to the vet, or need any attention.  I'm sure that will be easy, right?
- December 01, 2010 1 comment:

Driving home from work yesterday, buzzing down a rainy I-5 from Portland to Aurora I spotted a motorcylist in my rearview mirror.  Huge Harley, bright yellow jacket soaking up the rainwash from my tires.  I was filled with envy as I wondered how much of a pansy I was for being in a car while someone else was out riding and enjoying their bike, weather bedarned!

As he passed me I was finally afforded the view I never get to see...exactly what it does look like when a crazy motorcyclist decides to ride in the wind, rain, and low temperatures.  And guess what?  It looks dangerous!  The motorcycle flew by and became a blurry streak of nothing, the yellow jacket barely visible.

I thought of all the times I've ridden in weather like this, braved the cold, the wind, the pounding rain that feels like pellets smashing against your heavy gear as if you have nothing on but a pair of thin tights.  And to think I've been doing this in a black and gray (or blue and black) jacket, my visibility turned to nil.

I decided to do a little research and this is what I found (compliments of Web Bike World @ http://www.webbikeworld.com/Motorcycle-Safety/safetypage.htm).  Basically this is what I learned:

Be safe and be smart this winter if you are one of the brave riding!  I'm starting my Christmas List and what's on the top may be a brighter helmet and a jacket with reflective strips.  That is, if I can just quit dreaming about a new BMW!
- December 01, 2010 1 comment: