From NOLO I headed north to Monroe, LA again (had to return a POS camera) so I stopped and hoped to see the Duckmen again. No such luck.  Evasive bastards.   Headed to Tyler, TX for the night since they had a RUDY's BBQ...which I ate for dinner and breakfast.

After Tyler, I rushed to Waco, TX,  my favorite destination:  The Branch Davidian Compound. Last time I was in Waco I had back up...my pal Jenn (well, if you count someone who ditches you and leaves you with strangers as back up).  This time, I was solo and really just curious about how the place had changed over the last few years.  Why?  I have no idea. Mostly, I was wondering how much the place has grown and if the troops of religious zealots had returned...and if so, what did they hope to gain? 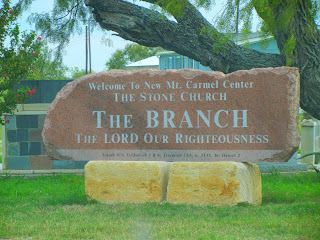 The place looked much like it did in 2011 when I was there.  The only major change was the awesome fence surrounding the place.  Imagine my shock as I drove past the church and saw Simon, the man who had given me the previous tour in 2011.  He was tending the garden and as I made my way to his location, he kept working, not looking up until I was almost standing next to him.  He wasn't wearing the hat I'd come to associate with him, but a simple baseball cap.  His teeth had been fixed and when smiled he wasn't as scary as he had been previously.  I introduced myself and told him I just stopped by to check things out.  He said I must have come back for a reason.  I insisted I was just curious...and he proceeded to break into a sermon that would revel all sermons...talking about how I was sent there and how I should just go home and pack my things and come back because it was God's will.  Hmm...that'll teach me to visit.   Charles Pope (the most recent preacher) called Simon and he disappeared, rushing to do Pope's bidding.
I wandered over to the church where two dogs were scurrying my way with big barks and wagging tails.  Along the way a small rat snake cross my path...reminding me where I was and that evil, scary crap was all around.

Simon came back and asked my name.  When I told him, he started talking about how Jess is a branch and I was meant to be at the compound.  I eased over to my car and kept smiling...wondering if anyone would notice if I were kidnapped.  We exchanged numbers and I was quickly on my way.  Yes, fine, judge me.  But frankly, I think being on the inside with a scoop of the next massively religious Waco event would be cool.  Or maybe not.

From there, I went to the library to do some serious research, stopped by the Texas Ranger Museum for a tour and spent a great bit of time at the hotel, chatting it up with the a local about the day Waco went wild.
- November 24, 2013 No comments:

Today's journey took me from Monroe to Mississippi to Myrtles Plantation (most haunted place in Louisiana?) to Baton Rouge to New Orleans (NOLO).

My plan was to spend a night in Baton Rogue but after hearing everyone talk about NOLO I decided I may as well keep driving the extra hour and a half.  I found a hotel in the French Quarter that wasn't badly priced and booked three nights.  The Chateau Hotel is on Chartres and St. Phillip and it has parking (win)!   Apparently in NOLO's French Quarter they can charge any price they want for a hotel, so each daily rate is different, even if you book at the same time.  WTF.  I ended up paying $109 per night for a room smaller than the size of my living room.  It had a tiny tub (seriously, it looked like someone stole it from an RV) and even the bathroom door was mini.  But, it was in a good location and had really good AC (though the TV was from 1980 but I'm wasn't really there for the TV).  There was a small courtyard that had a pool and some seating areas.  It was a nice place...nicer than my buddy's place across the street...which made me feel like I scored (and I actually found $20 when checking under the bed for serial killers, so double score).

The first night I was there I was walking around lost when a man named Walter stopped to help. Walter does maintenance at St. Louis Graveyard #1 during the day and walks the FQ at night just helping people with directions.  Turns out Walter is quite the tour guide.  As we were walking he was telling me all about each house or restaurant's ghosts and residents.  It was pretty cool.  As we were walking we stumbled across two other tourists (from Ohio) who were trying to find their way back to their hotel.  We gathered them up, cautioned them at every curb (seriously, they had been drinking a bit) and we all had a jolly time learning about FQ and chatting it up.  One of them was wearing an Oregon shirt (ISUN:  I shit u not!)  so we became fast friends.

I made my way to Coop's and had some awesome (but very spicy) Gumbo with rabbit and deer meat. Then met Ohio 1 & Ohio 2 at their hotel bar...where they continued to drink Hurricaine's and amaze me with their drinking ability.

The next morning we hit Cafe Du Monde for beignets (which were good but possibly not worth the hype I've been hearing about them all week, I mean, who doesn't love a donut smothered in powdered sugar?).  The Ohio's and I then walked to the graveyard to meet Walter.  Good times.  I won't bore you with the details.  We did NOT see any ghosts but we did see Nicholas Cage's tomb (thinking ahead and apparently why he's in debt...) also did not find Walter for our personal tour so I may go back and try again.

We parted ways so the Ohio's could hit Harrah's casino and I could go to Hotel Montecello  (the most haunted hotel in Louisiana ...hmmm  a lot of places are claiming that....).  I ate breakfast there, giving the ghosts time to wake up.  They didn't.  Oh well.   I then tromped back to my hotel, stopping at some shops that caught my fancy along the way.

The next few days were spent hanging with the Ohio's, eating great food, touring the city, drinking (a lot more than I would have though given the Ohio's ages).  While sitting in a bar waiting for a ghost tour a group of wedding goers paraded down the street with music and umbrellas waving...totally the coolest thing I've ever seen.  We went on an alligator tour that rocked. This is a MUST do...though by the end I was freaking out about snakes and not too concerned about the alligators.  Apparently the best time to go to see the 'gators is in May when they are waking up from the winter and hungry....note to sell....stay away in May.

Overall, my time in NOLO was awesome.  Mostly thanks to the great company.  But, I was excited to get moving...next stop...Waco TX.  Not your typical tourist destination, but me, I'm definitely "Waco Curious".