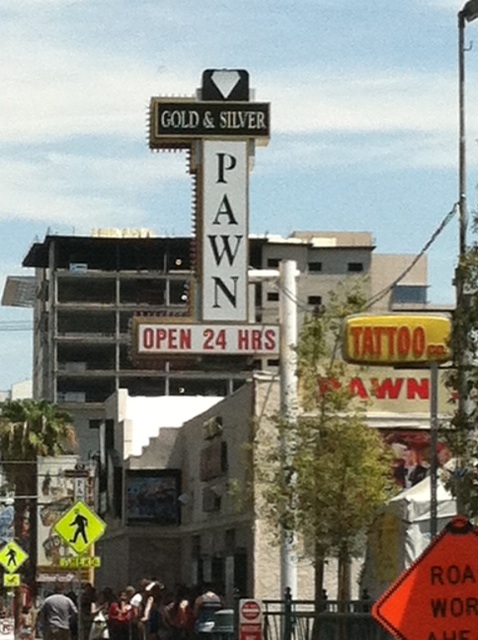 After the BBQ disaster, Lou and I decided to drown our sorrows at the Gold & Silver Pawn Shop in Vegas, home of the History Channel's Pawn Stars.  This is a tiny looking building in the middle of chaos.  And in front, a long line of admirers, actually waiting in the 100 degree heat to go inside and catch a peek.  Um, didn't they see the sign that said "Open 24 hours" ???  Why not come back when no one is there?

Anyhoo, we drove past a few times and decided jointly that waiting in line to get into a shop that sells used crap was a bust.  So instead we headed over to another television favorite, Counts Kustoms.

They weren't that far away from each other so if you see one, you may as well see the other.  Counts Kustoms is located in a tiny little industrial park with minimal parking with GRUMPY (notice all caps) neighbors.  Some of the custom rides were out front.  The totally cool Volkswagen Bus was a particular favorite of mine.  We would have gotten more photos but the jackass in the glass shop came out and was screaming at us.  Boy did he lose a sale.  You know, if I'm ever in Vegas and need a piece of automobile glass, he is SO NOT getting my business. 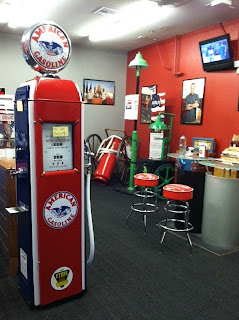 A few minutes away from Count's Kustoms is another television stalker (I mean "fan") favorite, Rick's Restorations.  I've spent some time watching this show with my peeps so I know there's cool stuff there.  Oh you have no idea.  There IS.  But you can't really see any unless you want to take a $50.00 tour of the place.  What the hell?  It's not enough that they have a million t-shirts (no, I didn't get you one) for sale along with mugs, stickers, magnets, etc.  No, they have to RUIN history by charging us.  It's not like they charge you to get into the Oval office (oh wait....).   There was some pretty cool stuff in one room, but everything had these signs that said "Do NOT touch."  Geez.  Buzz Kills.  It made me want to eat a peanut butter and jelly sandwich and go to TOWN on this stuff.  Smear.  Smish.  Smear.  Take that, Rick!!!!
The best thing about being a television stalker is you always get second chances...our second chance came in the form of Lola's - A Louisiana Kitchen, another Diners, Drive Ins and Dive's pick.  And, shockingly well placed on a map, it was RIGHT around the corner from Rick's. Literally.  You could walk.  Lola's had good reviews from Guy, but more importantly, from Lou's sister, Bean.  We decided to give Guy another chance and BOY HOWDY was he right on track with this place.  Lola's is awesome.

If you go to Lola's, head to the bathroom. Really.  In the hallway there's a huge map of the United States and a tribute to 9/11.  There are map pins so people from all over the United States can put a pin in and show were they are from.  It's kind of cool.  I put a pin in for Lowell, Oregon since that's technically my hometown. 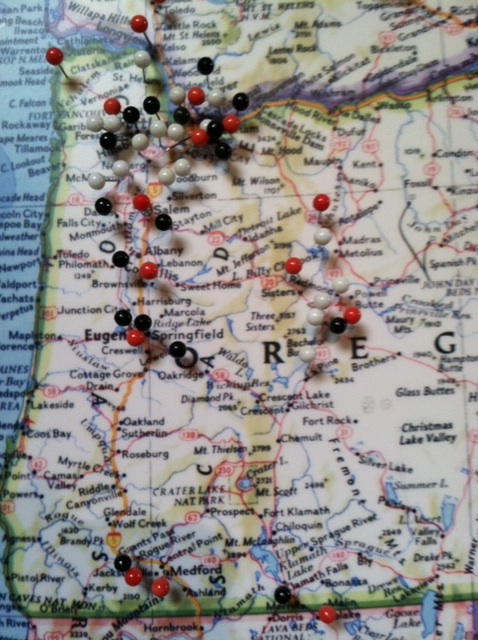 We ended up heading to the liquor store and then rushing to get the rental car back to the airport.  We were going to take the South Point's shuttle back to the casino.  Of course we were cutting it close so we told our shuttle driver from the rental car place we were on a tight timeframe.  He told us that wasn't a problem and he'd get us there in 5 minutes.  Yeah right.  I don't know his name, but he was all tattooed up and said he used to own a few gyms until he met his girlfriend there and got her pregnant.  Apparently she forbid him from going back to that type of work since she was worried he'd meet someone new there. Kind of funny to see such a macho man all whipped up like a ...oh never mind. He was a good driver, even drove through a red light in his zest to make sure we were there on time.  We made it with minutes to spare and as we jumped off the bus and hoofed it toward the terminal we heard someone yelling, "Ladies!  Ladies!"  Lou turned around and noticed it was our driver, pointing the other direction!  We turned around and still ended up getting to the shuttle with at least a minute to spare.

I'm always amazed when people are kind, as I expect the very worst after living in the big city of Portland.  I'm happy to report most the people we met in Vegas were perfectly wonderful.  In fact, many went out of their way to help us and make sure we were having fun and going to the right places.  Maybe that's one of the reasons we make the yearly pilgrimage...Vegas is a nightmare but the sights and people are pretty darn awesome.
- August 11, 2013 No comments:

Today we hatched a brilliant plan to win millions in Vegas.  Ok, you're right.  We didn't.  But we did decide to use the rental car and check out some spots made famous by television.  Well, famous to an extent.  More so now that we've visited them. 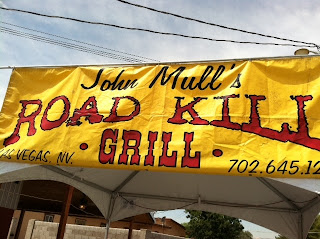 Our first stop was John Mull's Meats and Roadkill Grill which was on an episode of Food Network's Diners, Drive-In's and Dives.  You'll need a GPS to get there.  It's tucked into a little neighborhood way off the strip.  It's one of those places you wouldn't find accidentally.  It's got some charm.  A cute seating area complete with fans and misters (which you'll need in the Vegas heat), and a long covered walkway for the lines I hear you'll have to wait in on a regular basis.  We arrived early...so no lines held us back.  Which also meant we were a bit confused on which door to enter through despite the fact that one was aptly signed  "Entrance".  Walk in and you'll wonder if you haven't still taken the wrong door.  Inside you are greeted by a tiny area that houses a butcher shop and steps away, a counter for ordering BBQ.  There isn't room for more than maybe ten customers. All the seating is outside.  We grabbed our grub and headed for the picnic tables.

Lou and I were both so very excited to taste awesome BBQ.  This was going to be the highlight of our Vegas trip.  Oh how quickly dreams die with the opening of a food container lid (that was a fat joke, keep up people). 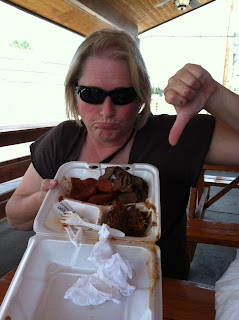 Um, Guy (host of 3D's), I'm sure you know your stuff...but you WERE SO WRONG about this place.  I don't claim to know BBQ (ok, well I claim it a little) but I do know that the BBQ cooking at John Mull's was a disappointment.  Not just for me...my pal Lou didn't like it either.  We ordered a huge assortment...ribs, pulled pork, sausage, and brisket with mac and cheese and baked beans. The reviews rocked.  The food did not. This is probably good BBQ to some people.  I found it flavorless.  It was as if someone boiled all the meats and poured too much bland sauce on it and then slopped it on a plate and crossed their fingers.   This was the first time in history that I've left MEAT on my plate.  I swear, if I hadn't ordered pulled pork, I'd be wondering what that sloppy mess of congealed meat was on my plate.  I'm not going to be too harsh.  I mean, the sides ROCKED.  The mac and cheese was delish..and the beans, though not what I'm used to, packed some great flavor.  I wish the meat would have done the same.  Or that I'd tested it before I ordered extra to take back to the hotel...which ended up in the trash.  If you would have told me a week ago I'd be throwing BBQ away I'd have told you to shut your filthy mouth.   Oh the agony.  It's almost hard to admit I tossed pulled pork in the trash like a virgin throws away her morals at the prom.

I only hope there's still time to recover from this tragic event during the rest of our vacation. I've written a small poem so you can all feel my pain...

"Disappointment lingers
Where once bbq was on my fingers...."

That's all I came up with.  Sorry, I'm distracted by all the sadness in my heart.

Lou and I are in Vegas for our 2nd Annual Summer Retreat.  Oh yeah.  Nothing like a few days in 104 degree temperatures to make you appreciate good ol' Oregon.  We decided to fly this time instead of spending 14 hours in the car, which was awesome...until we got to the airport.

Let me give you a quick run down of what our first day was like:

Airline:  45 minutes to boarding pass. What happened to the air conditioning? Why didn't we print the              passes at home?
Plane ride:  Seats with no baggage area under...so stow baggage four rows behind.
Depart plane:  Wrestle with old people to get back to baggage. Damn it's past my bedtime.
Rental car:  45 minute wait.  What?  No cars?  I reserved on Travelosity. Crap.
Ride to hotel:  How many wrong turns have we made?  Why did I forget the GPS?
Dinner:  Burger King. Pulled Pork?  No sweet tea?  Geez.
Hotel:  Off the strip, a perfect place. Second year there.  Still in love with it.  Smells like cigarettes.                Old people everywhere.  Makes us feel young and spry.


The blog posts that follow are going to bore you to death.  Be prepared.  Don't say I didn't warn you...