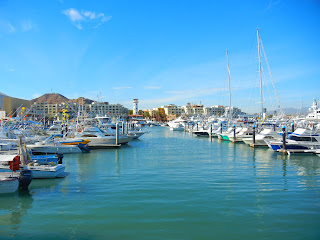 Landed in Cabo on Saturday, able to outrun the snow that is currently blessing home in Oregon.  I am with Jennifer who has, since Ireland, decided some vacations should be more relaxing...no helpful spreadsheet for Cabo?  What the hell!   We also have a third with us, my friend, Jason, who brings to the table comedic relief, extreme dorkiness, and acts as someone to beat up the Federalies.  I have known my two travel companions for over 15 years each, which is a blessing or a curse, I haven't yet decided.  I definately know which way I'm leaning.


Jason likes to be called anything but Jason.  He seems to favor the name Irish Jay, and even calls himself that and signs his name that way.  With all due respect, I like to point out that it is NOT his name.  (Note, we met this awesome chica named Patty who taught us that in Mexico when you want to tell someone to screw off you say, "with all due respect" first, hmm, that's coming in handy.)   I also like to laugh and make fun of him, and I pray that some day he does actually visit Ireland and tell someone that's his name so he can come home to the States and tell me all about how he got the shit beat out of him while in Ireland.  Irish Jay also has two bachelor degrees (which I like to point out don't mean shit in the scheme of things) and he's sensitive.  Like a girl, sensitive.

Irish Jay's main theme thus far into the trip has been this crazy messed up idea to wrestle a shark.  Yeah, you read that right.  Irish Jay wants to wrestle a shark.  That alone isn't the worst thing in the world...what IS the worst thing is that Irish Jay keeps asking everyone (and I mean EVERYONE) if you can wrestle a shark here in Cabo.  Most people just look at him and shake their head and mumble something about a crazy gringo, but some actually humor him and tell Irish Jay he's an idiot.  It is those responses that I favor. On the water taxi from the Mango Deck to the dock Jennifer and I almost had the driver convinced that he should turn the boat around and head to sea with Irish Jay.  Of course, he probably thought us offering him $50 and telling him we'd slit Irish Jay's throat first was a bit scary.  So, he dropped us off without taking us up on our offer.  I think someone will eventually agree to help us...it's early yet and I'm not giving up.

We have gotten out of bed early both mornings due to the timeshare "pushing" that goes on here.  It's like crack.  Off the plane you are immediately bombarded by people who offer you free things if only you sit through their 75 minute presentation.  Clearly the Mexican clock runs a little slower than the North American one.  The presentation lasted maybe five hours and the high pressure sales pitch was entertaining.  Jennifer and Irish Jay got a free parasailing trip today, we ate breakfast free two days, we have a free booze cruise tomorrow and on Thursday we are going fishing.  The 75 minute sales tour is paying off.  Somehow, I still wonder if it's worth it to be in paradise and spend even that long doing something you really don't want to do.  But, I guess that's what life is all about, doing stuff you don't want to do.   Like calling someone Irish Jay when, with all due respect, his name is actually Jason.

Oh well,  I've got nothing to do and five more days to do it.  I should count myself lucky that when the snow is falling back home I've got my feet in the sand.  And, an additional bonus is I now know where I can get some weed, crack or chicks for $20.  Yep, Cabo is exactly what I expected and everything I didn't.