Battery Change: I need a monkey.

I finally got Runkle out of my friend's garage after a two month accidental storage.  I dropped Runkle off around Thanksgiving then went on vacation to Mexico, then Christmas came, and finally I remembered I needed to plug in the battery.  By the time I got to Runkle, the battery was dead dead dead.  Darn nabbit!!  I plugged Runkle in but it was too late.

After a quick trip to BMW Motorcycles of Western Oregon I was relieved to find my battery was "only" $105.  Yahooooo!   I was informed it was "EASY" to put in the new battery.  I'm shocked they didn't say it was so easy a monkey could do it. 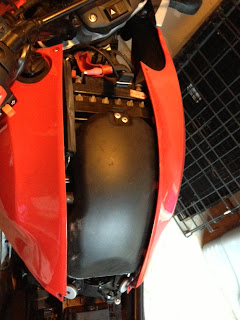 First, I took my seat off, expecting the battery to be right there.  Um, yeah. It's not.  I looked around and thought it must be under the tank plastic.  Great.  I thought about calling the BMW shop, but I'm tired of making them laugh.  It's starting to make me sensitive.  Instead I booted up the MAC and did a quick search of "2010 BMW G650GS battery location."   ARGGG.  I wish I had a monkey.

Finally, I figure out I'm going to have to remove all the freaking plastic.  I hate doing that.  Why you ask?  'Cause as easy as it is to remove a few screws, something always goes wrong for me.  I removed the plastic and the battery was in plain sight.  Great.  I unlatched the battery strap and realized I had no idea where my short screw driver was.  I just moved and am apparently not responsible enough to put my tools back.  Unfortunately I have no one to blame but myself.  Geez!  What should have been a ten minute job made me wanting to take a dinner break.

I chugged along, removed the screws, put the new battery in, and started putting the screws back into the battery posts (I have no idea what I'm talking about).   When I had it all tightened down I felt a sense of triumph.  I started to pull the plastic battery strap back on and it pulled out all the way.  Damn it.  I needed a banana.   I spent the next ten minutes trying to see where the bottom latched but everything was too tight.  I kept sliding the strap down and pulling up, hoping it would catch.  Damn! I was seriously considering my options:  remove the battery again or just put the plastic on and forget about it.  Hmm...what would Madelyn from European Motorcycles of Western Oregon do?   Damn.  She'd probably make sure it was done right.  Damn!  I spent another ten minutes trying to get the strap to hook and finally, it did!  I jumped up and down and made monkey noises!

I moved the plastic back in place and heard a "tink tink."  Hmm, sounded like something dropped.  What could that have been?  Who knows?  Move along, Monkey!!!  So I did.  I started to screw the plastic back around the tank area (I know, I'm pretty technical), and then I figured out what that sound was.  One of the thingamagigys that holds the screw on had fallen (too technical for you?).  I spent another few minutes trying to locate the missing thingy, but luck was not on my side.  Damn.  Damn. Fine, I thought, I don't care!  I skipped that screw.  I figured my tank bag from Giant Loop would hold the plastic tight.  I'm sure when I get my oil changed again they can fix it.  I mean, that will give the BMW shop something to do.

Almost two hours later, I started my Runkle and heard that sweet sound of freedom.  And shockingly, I began to wonder if Trout could ever see herself hanging out with a monkey while I was at work.  The monkey could play ball with Trout and do my bike repairs.  Win win.