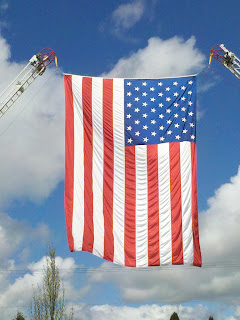 A week ago today Eugene Police Officer Christopher Kilcullen was fatally shot while in the line of duty.  He had been with Eugene Police Department for 12 years and was most recently a motorcycle officer.  His friends, family, wife and two beautiful children were left to wonder how something so awful could occur to someone so wonderful.  Since that time I've read numerous articles about what reportedly happened (with accounts varying by station), what should have and could have happened.

I found myself at his memorial today along with approximately 5,500 other people who were either lucky enough to have met and been a friend to Officer Kilcullen, had simply a passing encounter, or just wanted to pay their respects.  There was a sea of uniforms, dark blue, light blue, shades of green and red from the many law enforcement personnel who were in attendance.  One officer on the shuttle with us was from California.  One honor guard member was from Canada.  Others proudly wore badges from Gresham, Multnomah County, Portland, Bend, Rainer, St Helens, Cottage Grove, and every place in between and farther away.  There were TSA agents and Forest Service enforcement there too.  An equal opportunity mourning location.

I'd never been to a police memorial before.  What struck me was the silence.  A silence so loud that my heartbeat seemed a disruption, my occasional sniffle an obstruction to the cause.  Bag pipes that I'd heard before never sounded as beautiful, and photos I'd had the opportunity to review before never shined so bright. The Honor Guard, slowing walking two by two to the front of the room then back somehow made me feel secure in knowing that even though Chris was gone, someone else would still be there to fill the gap.  The end of watch call out brought tears when I thought I'd finally found the strength and courage to hold them back.  And now, hours later, I am still fighting a battle inside myself, willing myself to be a better person and to remember that the best people always leave us early.   They are here briefly to show us the way then they go, confident that we can follow the example they have left us.

It is because of Officer Kilcullen's tragic death, his life cut short much before his time, that I am trying to be a better me.  Trying to follow the advice Officer Kilcullen's dad gave at the funeral.  John Kilcullen made a point to remind all of us that making time for family is important because you never know when you won't have tomorrow to share with them.  I've been thinking about this more as I age.  It's not just family though, it's friends as well.  I rush to work then rush home to rush to the gym to rush some place else.  When there's a break I am alone, content in the quiet peacefulness of my own world.  I don't stop to question what would happen if tomorrow never came.  I am always so sure tomorrow is a few hours away, waiting patiently for me.  I don't call that friend whom I care about when I stop to think of her because I am sure there will be time later.  The years tick past as if they are simply seconds until I realize that friend I held dear is almost a stranger and that family, well I don't even know them, either.

I hope this tragedy that has befallen Officer Kilcullen's family (which includes EPD) will make everyone stop and do what his wife requests.  It's not much, just tiny things that will make you a better person and the world a better place.  Because, as Mrs. Kilcullen said, and everyone would agree,  that's what he did.

"Be kind to one another.
Do something nice for a complete stranger when no one is looking.
Volunteer at a school.
Adopt a sweet animal at Greenhill (Humane Society).
Tell your wife that she is stunning without even trying.
Give someone a compliment because it is true."

I'm looking for some cool duds to wear on my new bike, Runkle.  I thought I'd start small with boots since I'd love a pair for off road use.  I'm currently styling in my Danners (goretex) while cruising around town.  I'd like something that offers a bit more support that's easy to put on and can take abuse better than the leather of my Danners.  I hate scratches and knicks in stuff, so a knicked toe and I'm peeved.

I started checking out various sites and when I looked at women's boots, well, this is black and red two buckled dream came up. I think the Icon's are a pretty sweet pair of boots and if I were going out on the town I know they would impress my friends. But, on the bike?  How can I be taken seriously when I'm wearing heels on a dual sport?  (I do like the colors, though!)

Ok, that was fun, now onto some serious boot reviewing.  My next attempt was to just type in "women's motorcycle boots" in Google.  Everyone loves a good Google (or two).  What I found was not impressive to say the least.  There were various versions of black boots with different heels that are supposed to make you look sexy while riding (I don't look sexy anytime so why try to when I'm riding?) and other boots that were very "chunky" (which I can relate to) that appear to be made mostly for girlie Harley riders who want to look macho.  Finally I Google "women's motocross boots."

I mean, it can't get any worse.   The first site that comes up offers me the Oneal boots.  Cute, functional, flares of pink.  Unfortunately, I'm one of those girls who isn't incredibly fond of pink.  I am goo goo for the color red and that's about as close to pink as I can get.  I don't like to advertise that I'm a chick on the bike.  Pink screams "girl rider waiting for you to ridicule."  I mean, the one time I accidently forget to put the kick stand up while attempting to ride away becomes a whole "chicks shouldn't ride" episode if there's any pink involved. (Not that I know what happens if you forget to put the stand up.)   The Oneals are around $100 but I can't tell if they are waterproof.  I need waterproof since I live in Oregon and the weather here is mostly rain with showers thrown in.  And, frankly, I worry about the quality of a pair of boots that are so economically priced.  I like the look of the Alpinestars Stella Tech 6 boots which come in around $199 on sale (regularly $279).  But, again, no mention of water resistance or proofing.  This is more work than I had anticipated or wanted.

Reviewing One Wheel Drive.net (http://www.onewheeldrive.net/) I happened across their article on May 6th and International Female Ride Day. My thought:  I must research this.

International Female Rider's Day began in 2007 as a way to get women on motorcycles to "just ride."    What's exciting about International Female Rider Day is that women around the world, including "Canada, United States, Australia, England, The Netherlands, Greece, Italy, Poland, Israel, Qatar, Denmark, and Russia as well as other countries will be contributing to the campaign in compelling numbers."  (http://www.motoress.com/PressReleaseFRDFeb2011.htm).

On Friday, May 6th take the day off , hop on your bike and ride baby ride! There is no better way to support women and motos!
- April 06, 2011 No comments: