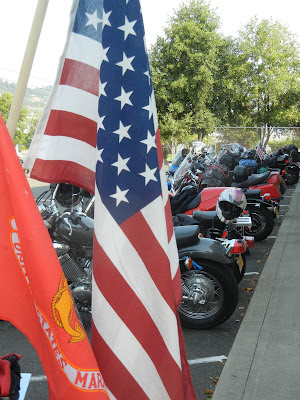 This year's Tribute to Fallen Soldiers ride was August 11-12 and started in Medford.  Skylar and I hit the road on Friday and nearly crashed after a chunk of wood flew off a trailer in front of us, got lost more than a few times, accidentally fell into some rum and tequila a few nights, had some spectacular BBQ and met some totally awesome people who were all there to show their support.

The jest of this ride is you spend two days visiting families of soldiers who have made the ultimate sacrifice for their country, whether theirs was a loss in battle, while stationed or at home after.  All the motorcycles and riders line up and then walk as a group to the families homes where the families are presented with a plaque for their soldier and thanked for their contribution, service and sacrifice.  That alone is enough to make a strong person falter.  Some of these families have recent losses, and for some, it has been awhile but the goal is to show them that their loved ones are appreciated and have not and will not be forgotten.

I stood in the back of the pack the few times I actually went with the group (go ahead, call me a chicken)...but most of the time I was not even close enough to hear what was being said and only my imagination showed me the faces of the families.  I wasn't trying to be disrespectful and their losses were not minimized.  As I stood a safe distance I watched as many leather clad motorcyclists slowly fell apart.  Over and over.  And yet they continued on to the next stop, ready to keep giving back.

I saw families accepting condolences, appreciation, and heartfelt words from total strangers.  I marveled on how resilient people are, and how tragedy can ruin someone and yet someone else can take that same experience and do something wonderful with it to honor those who have been taken away. 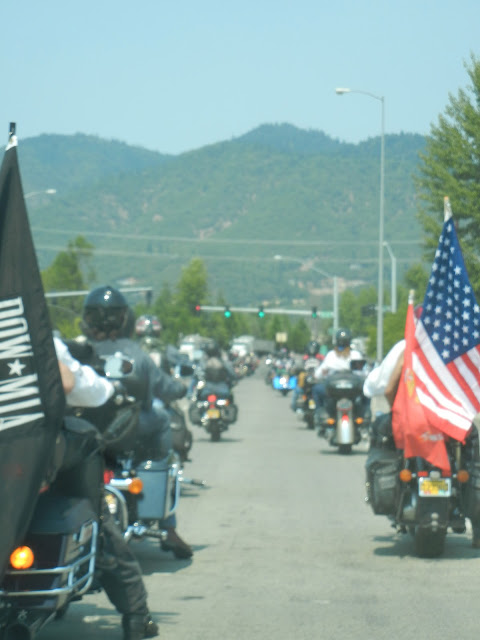 There is something about seeing strong men walking away from the group, sunglasses in one hand and the other wiping tears that cements the reason for this ride into one’s mind.  It isn’t an event to raise money for a specific person, isn’t something that is done in order to gain publicity or to build ones self up, but instead to build up a nation, to remind us all that each and every person who has served our country, living or dead, should be remembered and honored as the true heros that they are.    So stand up, take a moment of silence to reflect upon those you know and don’t, then do your part to make a difference.  It isn’t asking much considering the sacrifice others have given and the families who are left behind to mourn the loss daily while the rest of us continue on blissfully unaware of the pain, loss and sorrow.

The Tribute to Fallen Soldiers Ride is one of those rare rides that means much more than anyone could ever explain.   It's not a "little parade" done out of selfishness and greed.  It's a chance for each and every person to say "Thank you" to those who have served.  This ride needs your support to ensure everyone is remembered and that every sacrifice has not been in vain.   Join them next year for the Torch Run or for the Fallen Soldier Ride that will take place in August.  It’s an experience you won’t forget.  And if you don't ride, that's not a big deal.  You can still help.   Go to their website (http://tributetofallensoldiers.com/) and donate, volunteer, sponsor, or just plant a flag in your yard. 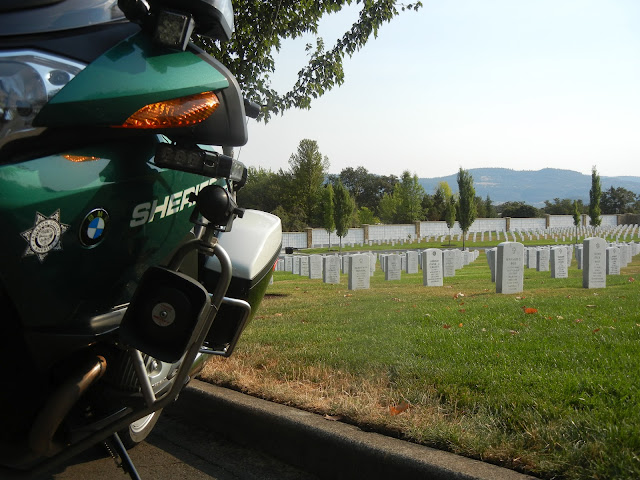 Special thanks to the law enforcement community who helped along the way.  You have no idea how much SAFER this ride was with your participation and support.  THANK YOU for being there, for doing your part and for showing each and every one of us how wonderful you really are.   You really made a difference and are appreciated. 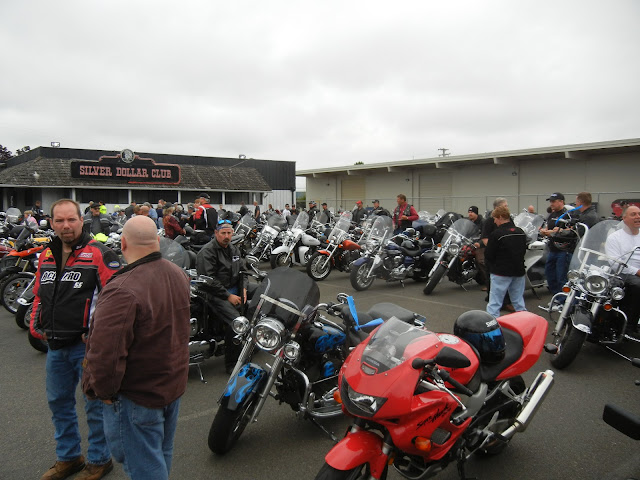 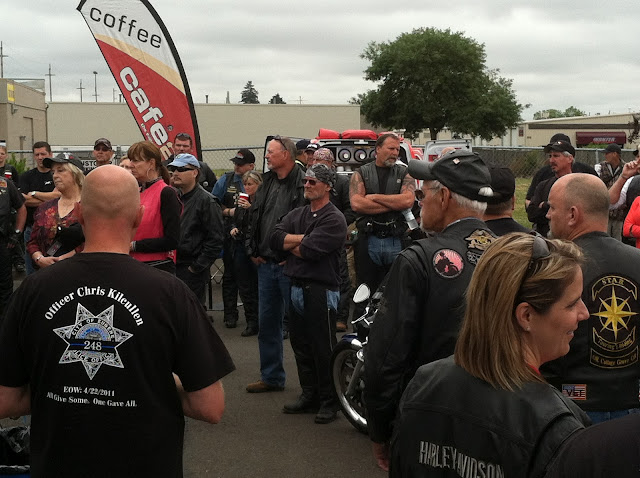 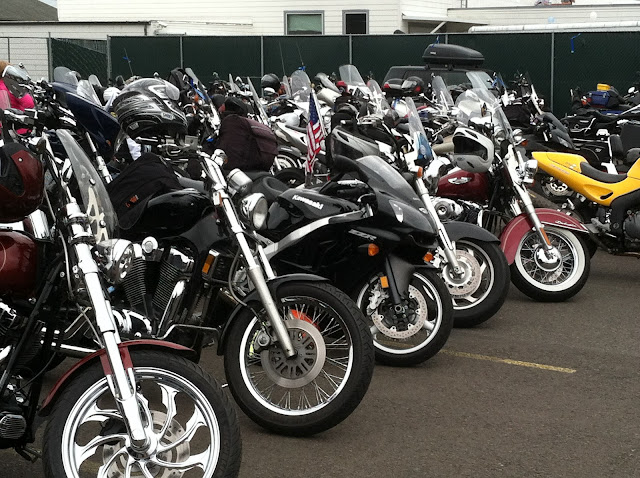 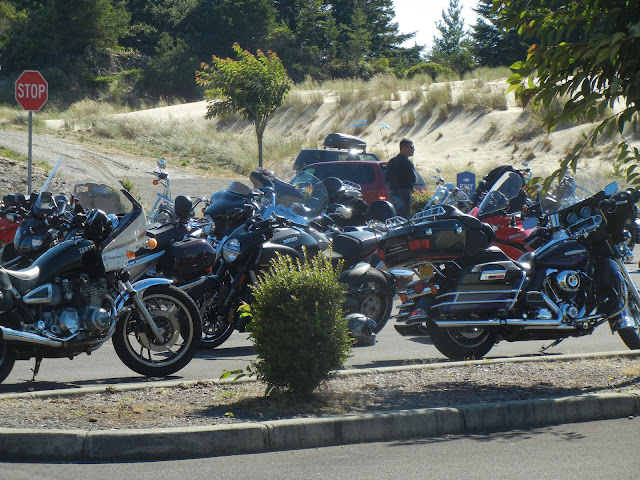 Sunday, July 29, 2012 was the second annual Chris Kilcullen Memorial Ride.  It is a ride that Brian Antone (an officer at Springfield Police Department) started in 2011 after Eugene police officer Chris Kilcullen was murdered on duty.   The first ride was a success...over 200 riders gathered to raise around $10,000 dollars in Officer Kilcullen's memory.

Riders in 2011 had a good time but they wanted more...so Antone offered up something bigger and better this year.  With the help of some awesome volunteers, fabulous sponsors, donors and supporters,
the 2012 Ride offered not only a pin with Chris's photo, but a t-shirt, BBQ lunch and a bus for those who either don't (or chose not to) ride.

The ride has for the last two years been 248 miles, which is significant because 248 is Chris's badge number.  This year the ride went through Corvallis where Team Oregon hosted the first pit stop.  From there, the almost 300 bikes and 400 riders rode to Newport where Newport Police Department hosted a second stop.  As Newport faded into the distance, the group converged upon Three Rivers Casino and Hotel for a BBQ lunch.  As a volunteer for the ride, I wasn't able to go the distance on my bike but instead headed straight to Three Rivers to set up auction items and make sure everything was ready for the group.  That gave me plenty of time to talk to the hosts at Three Rivers, Dawn and Mary, who we dubbed the "Dream Team" for their awesome work ethics and get 'er done attitudes.  As well, Lori made sure things were going as planned and that we had everything that we needed.

This year the Ride had a title sponsor, European Motorcycles of Western Oregon.  Madelyn, Scott, and Kendrick went out of their way to help with the cause...and even allowed us time on Saturday for registration and handing out t-shirts.  Sunday they opened their doors and their parking lot for the second year in a row for a staging area.   Their support was amazing and even Kendrick got in on the action and made almost 100 paracord bracelets with "248" on the face.  (You can still order one at European Motorcycles or on the Kilcullen Memorial Ride website, they are so cool!)

There are so many people to thank who made this ride happen...so many wonderful people who rode in support...and bought merchandise and BBQ tickets and who bid on auction items and bought raffle tickets.  So thank you, those of you who stand in the background, who help despite their relationship to Chris, who give up your family time, your work time, your free time and drink time.  Thank you to those who keep plugging along, who pick up the pieces when they are scattered everywhere, and who do so with grace and style and dignity.  I salute you all.

Perhaps the most impressive thing about this ride is that we raised more money than last year and had almost 400 people who showed up to support the Officer Chris Kilcullen Memorial Ride and the scholarship in his name.  Trust me, it was touch and go for awhile and I was starting to wonder if all our efforts were going to be for nothing!

At the end of the ride when delivering t-shirts we had the opportunity to talk to some of the riders and get their feedback.  Everyone was very kind and appreciative... I guess that makes it all worth while...and knowing that the scholarship will soon be completely funded which will allow us to move on to other things in the community...like car seats and projects that Chris Kilcullen had a heart for.

We are already working on ideas for next year, so if you went to the ride and have any feedback, feel free to send us an email or go to the website and share your ideas.  As well, if you have photos, we'd love to see them!