I took a two week vacation this May and rode my bike to Yellowstone with two of my favorite riders, Jerry (on a BMW) and Rusty (on his recently rebuilt Honda 650 dual sport).  Our journey began in LaPine, OR.  We headed east toward Ontario, OR,  passing over a huge section of straight, barren roads that offered nothing in the way of scenery.  We stopped the first night at a "campground" which was straight out of a Deliverance.  I swear I heard pigs squealing in the distance as I set up my tent. The campground was more of a permanent home for the slightly underprivledged.  The trailers and cars were all dilapidated, some on blocks, some on bare rims.  There were bathrooms but the smell of the water was somewhere between vomit and manure.  Horrifying but entertaining.  We parked out bikes near the tents and it was a miracle they were still there in the morning. 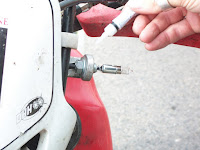 We took off early and headed northeast, making a minor pit stop when Rusty's turn signal started breaking.  He fixed it using a tube of Superglue from a local store.  Sweet!  Everything after that came up roses.  If only that were true.  We hit the first condo (hey I ride a BMW and we went in style) and it was a nice place but a little small.  Rusty and I slept on the floor and listened to the snoring from the other room.


The next morning we mounted up and headed to a condo at West Yellowstone.  We spent three nights there, Rusty sleeping in the living room and Jerry and I cozy in our own private rooms, finally able to stretch out and relax.  We bought over priced liquor and had martinis and cranberry vodkas before sleeping peacefully.  The next morning we took a leisurely ride through Yellowstone, seeing buffalo, elk, eagles, and all kinds of wilderness.  We sat for what seemed like an eternity waiting for Old Faithful to burst, listening to a family from Florida discuss the merits of an RV.  Back at the condo, after a full day's ride, we ate like kings, drank more, watched basketball and laughed at Jerry's stories. It was a perfect day.   The next day we were off to Butte, MT to meet one of Jerry's old co-workers for lunch.  We met at a restaurant that is famous for it's breads (sorry, can't remember the name) so we bought huge cinnamon rolls for breakfast the next morning (which we forgot to eat). 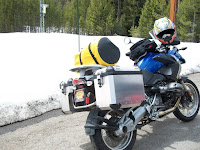 Apparently the weather wasn't as happy about our trip as we were and the storms were moving in as we slept.  We decided to head home as soon as we were packed since we had a couple passes to conquer.  As we rode from West Yellowstone the hail and snow assaulted us.  I screamed into my helmet, "Bring it on!"  The weather Gods were not intimidated.  Right before the first pass Rusty's trusty Honda started leaking oil.  I thanked my stars for a good job and a new BMW.  We stopped constantly to add oil.  We had a few miles of good pavement then the rain started...and kept coming...then turned to snow....then turned to hail and snow...and all the while I"m screaming into my helmet, "Bring it!"  because I figured it couldn't get any worse.  Then it did.  Really.  More snow, thick on the windshield and all over the helmet.  My temp gage (Yeah, I know, spoiled, but it IS a BMW) read 32 at one point and I almost felt my fingers freeze.  You couldn't see with the visor down and when it was up, freezing cold water smashed into your face like a sledgehammer.  Wonderful.  Luckily I had a heated jacket while Rusty, meanwhile, was forming icicles on his privates.  Good gear goes a long way to making happiness.   (My apologies while you try to remove the visions of Rusty's icicles from your mind.) 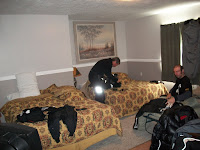 Right before quitting time the rain stopped and Rusty ran out of gas.  He pushed the bike until a woman came outside her house and offered to give him some gas to get him to the next station.  It was the one bit of luck we had that wasn't bad.  She told us about the next town and how to use the gas pumps even though the station was closed.  We found the hotel and when we rolled up helpful man told us the proprietor was off having a birthday dinner for his wife.  We hit the pavement looking for dinner and found a Chinese cafe nearby (ok maybe it was one of the only places to eat other than the gas station).  During dinner the motel owner came down and found us, saying he'd go back and prep the room (turn on the heat since we were clearly cold and miserable) and even took money off since Rusty would have to sleep on a rollaway.  Nice town and wonderful people... if you can excuse the giant white elk with it's butt facing the sky on the roof of the hotel. 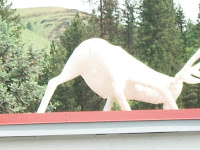 The next morning we ate two day old cinnamon rolls and and headed for Oregon.  And, wait for it, another pass with SNOW!  At this point I wasn't even trying to be entertained.  I was feeling sorry for Rusty and his bad gear, thankful for my nice waterproof pants and jacket, gloriously excited I had a heated vest, and beyond words thrilled about my nice gortex BMW gloves.  That night we stayed in a motel in a one horse town.  All I can remember is the one restaurant closed early, the motel was possibly used for a mass murder at one point in it's life, the words "clean" did not exist in the vocabulary of the staff, the floors creaked, the sinks leaked, but all I cared about was climbing under the dirty sheets and snoring.

That morning we rode a few hundred miles to LaPine and were home.  I took the next week off from my vacation to have a vacation at the beach.   And the week at Yellowstone?  It was a wonderful trip, a rider's dream on some roads, a nightmare on others. There's something about riding a bike through a snow storm and watching buffalo walk so close you can reach out and touch them, that bonds you.  So next year, I say we head...south.  To the sun and a beach.  Let someone else touch the buffalo.  I just want to touch a margarita glass and leave my heated jacket at home.
- May 25, 2010