I'm a bbq snob.  I'll admit it.  I'll also admit that "good" BBQ is really subjective.   I like my ribs to be pork and to be a bit over done so they fall off the bone.  I like my brisket with a visible smoke ring and sliced thick, and I like my pulled pork moist without being slathered in sauce.

In LA for work, I read up on Bear Pit BBQ which is just down the block from my hotel.  It has a great back story.  It first opened in the 1940's and has been passed to new owners a few times but remains almost the same as when it opened.  It is apparently "Missouri style bbq" which means nothing to me (showing my bbq ignorance) except that some people also call Missouri style St. Louis style.

At any rate, the Bear Pit gets good reviews on Yelp (3 1/2 stars) and mostly good on Tripadvisor (3 1/2 stars).  One would think a BBQ joint with 3 1/2 stars would shine.  Perhaps I hit the place on a bad day...but in my opinion, it gets one star, and only because the waitress was really nice. 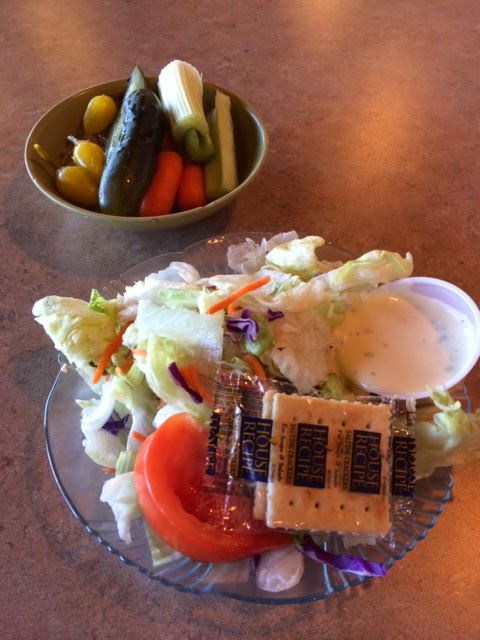 I ordered a plate with a little of everything that cost me around $25.00.  I didn't want to give an opinion on the place after trying just one item.  See, I'm being nice.   First, they provide you an "appetizer" in a small bowl filled with ice that has celery, pickles, peppers, and carrots.  Ok, I'll admit, I needed the veggies, but this was a bit weird, even for me.

When the salad arrived I took a few bites and then decided it was not very good so I wouldn't waste my stomach space.  It looked like someone just dumped a bag of pre-made salad onto my plate and tossed one slab of tomato on the side for decoration.  Not good.  And the dressing...I'm not familiar with how they make it, but I'm guessing this is a powder that they add some water to and mix to the desired consistency.  It was not very appealing but more so, tasted like crap.  (Fancy word, eah?)

I've seen the same exact salad at many other places and hated it every time.

When the main course arrived, it looked good.  I mean, it was a plate full of bbq.  How can I really not like that?  The brisket and the turkey was cut very thin.  So thin it was difficult to pick up.  And the meat all kind of tasted the same.  There was a small plate of something that didn't look like anything other than a hush puppy and I had to ask the waitress what it was.  Turns out they serve fingerling potatoes that have been deep fat fried.  They were cold, tasteless and dripping in grease.

The order came with a slab of what appeared to be garlic toast, which had potential but was also laying in grease.  It was like someone smeared butter and garlic on a piece of cardboard and heated it slightly.  Yuk.   Of course I ate most of it because it was one of the best things on the table.  Grease and all.


The chicken was deep fat fried and had no flavor whatsoever.  My meal came with two pieces but one piece, a wing, was so crispy I couldn't pull a string of meat off the bone.  The brisket and turkey had the same nothingness of flavor.  Blah.

The ribs were so bad I ate half of one before deciding I'd rather stop and get Taco Bell later.   Maybe it's a Missouri BBQ thing, but please for the love of God pull the membrane off the ribs.  I don't care what you think that membrane does for the meat while it's cooking.  If you overcook the meat (or maybe microwave the ribs to heat them up) that membrane turns into something totally gross and undesirable (much like my ex-boyfriend).

The only saving grace on this $25 meal was the baked beans.  The beans were very good.  Tasty.  Full BBQ flavor.  And in all honesty, the sweet tea was good.  How one would mess up sweat tea, I have no idea, so really that should not count as a win.

Overall, on my BBQ ranking scale, from one to five with five being awesomeness on platter, I give the Bear Pit BBQ a ranking of ONE.   They only get a one because I liked their waitress (not the other staff, the woman who took my money was not friendly at all) and they had fast service.

In a nutshell and to be brutally honest, this was the worst BBQ I've ever had.  And I've had some pretty bad bbq.

A quote on their website says "This is undoubtedly the best BBQ this side of the San Fernando Valley".  That may be true.  But if this is the best, I may as well give up my day job and open my own business here.  I'd make a killing, even with my limited experience.  I could make better ribs in my sleep.