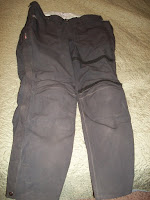 When I was first looking for motorcycle pants it was important that I have something waterproof, comfortable, easy to put on and take off, reasonably priced and above all, something that I knew had a good reputation.  I did a little research and ended up talking to a motorcycle cop from Eugene, OR who wore Aerostitch (http://www.aerostich.com/).  Turned out all the motorcycle guys on the force wore Aerostitch.  I thought if Aerostitch was good enough for them, surely they were good enough for me.

I bought my first pair of Aerostitch Darien's (http://www.aerostich.com/darien-pants.html) about four years ago.  After about three trips to the post office and two calls to Minnesota to get the sizing correct, I was happy to finally have a pair that fit.    I found I needed about two sizes larger than I thought, especially if wearing jeans under them. It is recommended that you wear something under since the fabric will get hot during a slide (sorry, can't test that as I haven't and don't plan on wrecking that severely anytime soon).  Since my purchase Aerostitch has initiated a policy of shipping the pants for free if you need a different size.  Kudos to them.  That wasn't an option when I purchased, but after writing them a brief letter they did refund half the shipping costs to me. 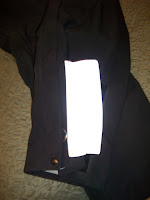 The Darien's come with zippers that go all the way down the leg enabling you to totally open the pants on either or both sides.  I sometimes use the zips as air vents since the Darien doesn't have any, per say.  The Gore-Tex Cordura fabric is at first very stiff but eventually wears in and is comfortable and durable.  In the four years I've had the pants I've crashed once in the gravel and the pants were no worse for wear.  There are reflective bits on the bottom of both legs that have velcro under, thereby allowing you to cinch the legs in when needed.  There is also a snap at the bottom of the leg, but honestly, I never use it.  The zipper doesn't have any issues staying put.
The pants come with a velcro optional map pocket,  a waist gusset (for those days when you eat too many cookies or drink too much beer) and a removable belt.  The pre-bent knees with removable armor are comfortable and large enough to cover the entire knee, above and below.  These pants are comfortable while riding and comfortable while walking around, eating lunch, or just hanging out.
The only issue I've had with the pants is the pull tabs on the zippers. The pants are still usable without the tabs but a bit inconvenient.  I have put key ring circles into the tabs and those seem to work great.  And, as a bonus, they are easier to grip when you have gloves on.  After the years of riding with the pants the only real noticeable wear is near on the inside of the leg where my boots rub.  And, to be honest, the waterproofing isn't working anymore in all the right places.  I don't blame Aerostich for that, as when I first got the pants, and probably for the first year, all I did was wash them.  I wanted to make sure they were clean after a big ride.  What I didn't know at the time was I wasn't washing them in the proper stuff.  I later learned if I used Nikwax Tech Wash and Direct Wash In (http://www.nikwax.com/en-gb/index.php) which I found at various retailers for around $7-9 a bottle, the waterproof life would last longer.
It's time for a new set of pants and you can bet I'll be going back to Aerostitch for a replacement pair.  The pants are a reasonable $297 and come in black or gray, sizes 30-46 and in long or regular length.  Aerostitch also makes a Darien Light that come in black, tan or gray and are made with a lighter Gore-Tex fabric.
Aerostitch has a website full of other tasty morsels, including the Darien Jacket, silk scarves, and smiley face puppets.  And who doesn't need a smiley face puppet?
- September 19, 2010