Earlier this summer I found a mouse in the garage that had gotten into a garbage can and couldn't get out.  He was barely moving and my guess was he'd been in there for days and he was dying of dehydration.  I delicately dumped him out onto the soft gravel and turned the hose on...letting little drips fall on his face, encouraging him to  drink and save his life.  He didn't seem to get it and his body shivered and convulsed (perhaps because I was drowning him) and then finally he stopped moving.  It was a sad moment for me.  Trout, who was barking in the mouse's ear, screaming for it to live, was very moved by the moment and she ran around me non stop as I did a funeral march to the trash can. 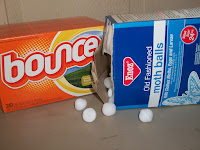 Lately the Beast has had a fair amount of mice droppings on the seat, tank, bags, and even tires.  Don't get me wrong, I think the little guys are cute, but the Beast hates them so they must go.  I Googled how to fix the issue and was informed moth balls do the trick.  The idea was to put the moth balls in nylons and hang the nylons over the bike.   I couldn't stand the thought of doing that to the Beast so instead I poured moth balls all over the cement around the bike.  They worked awesome!  In fact, they work so well that instead of being on the ground and occasionally getting on the Beast, the mice decided to stay ON the Beast and just hang out there all the time.

So I went back to Google and did some more research.  Turns out using dryer sheets works for keeping mice away from classic cars.  I went and bought a jumbo box of Bounce (since rumor has it Bounce works best) and envisioned my garage mouse free.  But first, I decided to clean up the garage.  I thought if I could clean things up and take everything out of that part of the garage then the mice wouldn't have a place to hide.  There are some items in the garage that are Ivan's so they've been there for awhile and the mice LOVE them! I started moving things and a mouse ran out from under a dresser and almost gave me a heart attack.  It jumped into a box and then couldn't get out.  I tried smashing it with a plastic pipe but it jumped into the middle and tried to shimmy up my arm then ran out of the garage.  The whole time I'm screaming like a little sissy and jumping up and down, waving this plastic plumbing pipe to and fro like a recently escaped mental patient.  Unfortunately for me there was a man outside the garage fixing the windshield on the work car.  I swear he looked around the corner and then slowly went back to the car.  He may have been laughing.  Probably not though, right?

After a bit of work I wrestled the dilapidated organ from the corner and another mouse ran out from under it and ran into a pile of discarded window blinds.  Like an idiot I moved the blinds and the mouse ran toward me!  I jumped up and down and scared the poor thing.  It ran into the garage door and shimmied it's well fed body into the frame of the garage door. I kept opening and closing the door, sliding it back and forth, and the mouse would peek out every once in awhile to see if I was still there.  When the door was closed and the mouse was closer he'd tuck under the bolts and hide from me.  He was so darn cute I almost forgot either him or his siblings had been under the motorcycle seat chewing on my wires.

Finally I went into the house, having screamed enough, jumped enough, and tormented the mice enough.  Maybe tomorrow I'll get the dryer sheets out and have the garage cleaned.  Today I decided to just sit back and drink a margarita.  I mean, it's not easy battling vermin and scaring windshield replacement technicians.
- September 23, 2010