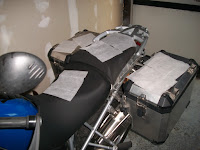 In a continued effort to keep the mice away from the Beast, my second love, I cleared a space in the garage.  I stapled Bounce dryer sheets to the lower part of the walls and spread them around the floor and on the seat and boxes.  I was proud of my work and impressed with my devotion to the cause.  As Trout and I checked on the Beast's progress we noted mouse droppings on the Bounce sheets on the seat...and on the boxes...and on the tank.  Frickity frackin feck.  Those mice don't seem to have any regard for the cost of the BMW or the fact that repairs aren't fun.  All those mice care about is play time!  They run up and down back and forth, climbing on and in the seat nibbling on the wires and the tool case.

Here are some terrifying facts.  Field mice typically move indoors during the colder months.  Hello October my evil friend.  Apparently mice can enter buildings through a space as small as a dime.  The average mouse lives up to one year and can have litters up to six times.  And, the worst news is that the average litter size for mice is 6-8 and it only takes 19-21 days for gestation.  And, sob, mice will be sexually mature after a month.  That means there are a whole lotta little buggars in the garage or waiting to move in, ready to eat the Beast piece by piece by next summer. 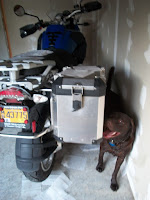 Dryer sheets clearly aren't working and will not solve any issues, especially given that the population is growing as I write.  In fact, the most disappointing thing about dryer sheets is that Trout seems to LOVE them!  Every time I open the garage door Trout rushes over and rubs her body all along the walls where the dryer sheets are stapled.  She smears her face along the sheets and comes up smelling springy fresh.


I guess the only logical thing to do is to get a snake.  A big, long, scary looking thing that will live in a heated cage in the garage and eat mice for breakfast, lunch and dinner.   Yep, I'm going for it.  If you can't beat them, join them.  I will start feeding the little buggars, plumping them up, and then I simply open the cage and Mr. Snakey will come out and play.
Oh, wait, I hate snakes.  And cats, they come in a rung lower on the ladder than snakes.  I guess I will have to just break out the poison and destroy the colony one by one.  (Insert evil laugh here)  Revenge will be mine!  Wait, I can't stand the thought of the little mice mamma wondering where her poor defenseless child disappeared to.  They probably have a mouse underground police station with my face on a wanted posted on the wall already.    May not want to start an all out turf war.

So today I started moving EVERYTHING out of the garage.  May be overkill, eah?  I figure if there were nothing but the Beast in the garage then it would be easier to see the little devils, right?  Rigggght.  As I'm moving Ivan's stuff to the pump house, an organ here, a saw there, I stop to put some burgers on the barbie.  I glance over toward the pump house and see a tiny little buggar (i.e. mouse) run into the pump house.  I rush over, Trout and Lab (the yellow stray who's temporarily adopted us, um, he's a Labrador, wink wink) following closely.  I catch a glimpse of the mouse behind the gas can in the corner.  I grab Lab and point in the direction of the mouse, anticipating a full force strike.  Instead Lab sniffs once then quickly loses interest while the mouse runs behind a pipe then back to the cans.  I grab Trout and instead of rushing forward she looks at me and I swear her eyes are asking, "Well what do you want me to do about it?"

Meanwhile Mr. Mouse rushes out the door and behind it.  I push the dogs out of the way and grab the biggest thing I can find, which happens to be a piece of plumbers pipe that's about three inches wide and open on both ends.  I have instant flash backs from the last time I tried to hit a mouse and the thing ran UP the pipe so I toss that and grab a rake.  I look behind the door and the mouse freezes and looks up at me.  Didn't expect that.  Now we are both standing by the door and it's like a western movie, both of us glancing at the door pondering who can make it inside first.  I slowly start raising the rake and the mouse catches me and bolts for the door, head ducking under the door and disappearing from sight.  I rush to the other side of the door and into the shed.  Stupid mouse runs for the corner again behind the cans.  I chuckle because I suddenly have the upper hand.  I'm ready to pounce and smash the mouse to little pieces when the Tiger rushes toward me, obviously deciding it's better to die fighting.  I drop the rake and scream like a sissy girl.  Didn't expect that either.  The mouse runs between my feet and disappears into the corner where I've already stacked a bunch of stuff.

Well, it is Ivan's stuff.  And it is in another building away from my moto.  I guess I've fought another battle, strong and valiant.  And then got upstaged by another mouse.  I'm not bitter though.  Well, at least not about that.

Email ThisBlogThis!Share to TwitterShare to FacebookShare to Pinterest
Labels: Ramble Me, Ride Me