Just home from Scotland and Ireland a mere two months earlier, I didn't have high hopes for Cabo.  I mean, how could a week long vacation to Mexico even compare to the three weeks of touring through the Isles and the scenery?  Negative Nelly (apparently me) had doubts.  However, Cabo turned out to be a blissful surprise.  The highlights:

One night Irish Jay was bragging about being in the National Guard and being trained to RUN into danger, and the next morning, Irish Jay was scurrying like a scared little bunny away from an opportunity to prove his manliness.

We woke up around 5 am and walked the half an hour around the docks to our boat, a tiny little 23 foot skiff with a Captain who clearly needed this excursion to be a win.  We were all tucked rather sheepishly into the boat as we were motored over to the Policia who do a preliminary inspection of paperwork and ensure the tourists have paid for their fishing.  Not our lucky morning (which was evident when we saw the boat), we were turned away and back to the dock where we were to exchange boats for one that had the proper up to date safety protocols.  I'd been making comments about the throttle on the boat, how it seemed to have a gas issue, but I felt confident our Captain knew what he was doing.  I mean, maybe that's how things were done in Mexico!  About twenty feet from a dock there was a loud bang and I looked up in time to see Irish Jay rushing away from the area like he'd just been attacked by a pack of wild bees. 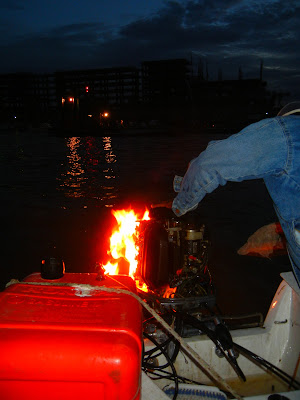 The boat motor apparently had an issue as flames were shooting out!!!  Jenn and Irish Jay rushed to the front of the boat while the Captain slipped past them and took the cover off the motor. He proceeded to dip the cover into the water and try to put out the flames.  Meanwhile, I'm in my spot, snapping photos and being encouraging, while Jenn and Jay were contemplating jumping off the boat but wondering how to save their previous electronics.  Other boaters were snapping photos but no one came to help.  Finally I decided it was maybe time to unhook the gas line since the red can of gas was sitting rather close to the flames which appeared to continuing upward and around the motor.  Jay was kind enough to hand us his knife to cut the cord which held the can on, but he was not about to come any closer.  I think I remember him saying repeatedly, "It's gonna blow!"  (Tough guy, right)   I unhooked the gas line as a boat finally came over with a fire extinguisher to help and the 15 year old kid on the boat put out the flames.  What did I learn?  Spend the extra dinero to go fishing on a good, big, well equipped and safe boat.  And leave the chickens on the shore.

Cabo has some wonderful bars.  For you drinking peeps (and those who just want to havea fun time) I have three that you must take the time to visit if ever in Cabo.  One of which is the Mango Deck (http://www.mangodeckcabo.com/).  It has bright tables and umbrellas and is right on the beach.  There are two for one drinks ALL day long and the margaritas are actually GOOD, which I have found is RARE at the bars in Cabo (ask for the good tequilla).  The people watching is the best thing about the Mango Deck but if it's too busy, walk a step down the beach and hit The Office and Billygan's Island.  Of the two, Billygan's was my favorite.  There are lounging chairs with umbrellas that can occupy half your day as you watch the people, enjoy some great food, and some terrific strawberry margaritas.   Of course, it probably didn't help The Office that one of their white coat clad "doctors' asked us to leave after we paid and were waiting for a local vendor to finish making a custom bracelet.  And, of course, if you enjoy being punished you should slink over to Cabo Wabo Cantina because that's where everyone thinks is cool.  Myself, I don't like the taste of Cabo Wabo Tequilla and think their prices are inflated.  It is truly a tourist trap but where else can you go to experience Sammy Hagar's finest attempt at restauranteering?   (If you don't know who Sammy Hagar is, please stop reading and go play with your iPad.)

Let's talk briefly about the Booze Cruise.  Prior to Cabo when I heard someone talk about going on a Booze Cruise two words came to mind:  OLD and LAME.  Perhaps I've hit an all time low or I've just matured enough to admit that those old folks know their stuff.   The booze cruise is the best bang for your buck.  Get it for free by checking out a timeshare and you can't go wrong.  Our booze cruise had a great Tequilla Sunrise, a lot of beautiful views, and so much laughter you'd think we were on a comedy channel.  Seriously.  Give it a go.  Just don't hook up with the photographer (hmmmmm is there a story behind that? Sorry, what happens in Cabo didn't happen.)
Cabo has some great views.  At practically any time of the day, the beaches around Cabo are wondrous.  The famed "Arch" is photographed over and over.  Cabo itself, well, not so much.  There were numerous trip hazards along the streets and garbage was everywhere once you got away from the main tourist drag, which was the waterfront.  Perhaps the best thing about Cabo is the possibilities.  You can do so much there...from lounging by the pool, to fishing, shopping, parasailing, ATV rides, hiking, and even exploring.  Cabo has something for everyone.

What did I learn from Cabo?  The sun, margaritas, and a lot of free time are all good things!

Thanks to Jenn for planning the trip and for buying a timeshare.  Mexico just moved up to become one of my new favorite places!!!

Email ThisBlogThis!Share to TwitterShare to FacebookShare to Pinterest
Labels: Cabo