Jen set her alarm last night.  Seriously.  We both were awake at 2 am after tossing and turning for hours.  The alarm went off at 8 am.  ON MY VACATION.  Note to everyone:  I do not set alarms on vacation.  I woke up and dragged myself to the dining area for free breakfast, anxious to try the oven baked bacon after trying the square sausage the day before.  (Note to ya'll:  square sausage is possibly thinly sliced heated spam.  And I, for one, do NOT EAT SPAM.)  I started breakfast by skipping the Cocoa Pebbles (I know, shocking) and ordering porridge.  Guess what?  Porridge is oatmeal.  Who knew?  (Oh, everyone other than me? It sounded so Oliver Twist I figured it was something special.) 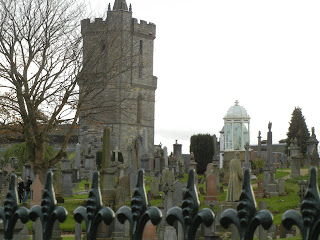 We left Edinburgh and headed toward the airport, luggage dragging behind on the cobbled streets, bouncing up and down and occasionally getting stuck in the large cracks.  Once on the shuttle bus to the airport we found the bus full and we were forced to ride standing room only.  Normally I skip the bus would pay for a taxi, but rumor has it taxi's are expensive in Scotland.  And, frankly, if I'd skipped the bus ride I would have missed out on the sweet memories of near death as the driver was a fricking maniac.  Grasping the railing for dear life, rolling suitcase swinging back and forth near my legs, I felt like I was on an amusement ride.  Sure made driving the rental car on the wrong side of the street feel like child's play. 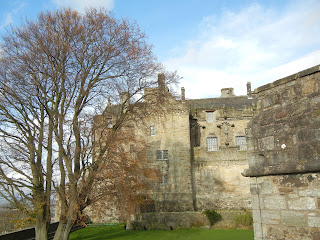 Today we toured Stirling Castle in Stirling.  It was a great tour...far less people than Edinburgh Castle and more remote. The scenery was awesome.  I prefer castles that look upon green fields instead of city streets.   We also took a tour of Argyle House, which was basically an old run down huge house that I'm sure was regal in it's day.  Mr. Argyle ended up being beheaded and so did his dad.  Great family bonding, that beheading.

Jen was kind enough to allow me to drive the whole day and although she kept screaming, "LEFT!" (among other things) I know she was not worried about my driving at all.

Oh, wait, SNAP.  That paranoid chick initially grabbed my arm to remind me to stop and avoid hitting the stopped car that was about ten feet in front of me, and then nearly peed herself when I "accidentally" ran over a small pothole.  I swear, the thing was only about the size of a small tire.  She wanted to stop and see if the car was dented.  Finally, I think I pushed her over the emotional edge as I "accidentally" hit the curb going about 60.  As I told her, it was a SMALL curb, more like a little mound.  Geez.  The roads are narrow here.  If I have to hear "You're close to the edge" one more time...I did offer to let her drive and I had to do the chicken sounds, "chick chick chick chicken" repeatedly when she refused.  And when it got dark, holy cow you'd think she'd never ridden in a car before.  Our conversation went something like this, over and over:

Me:  This Kia handles like a dream!  What's the speed limit?

Jen:  YOU'RE TOO CLOSE TO THE EDGE!

Me:  You want to drive?  No?  Chick chiCK CHICK CHICKEN!

Jen:  Our car is going to need an alignment.

Of course, it probably didn't make things easier that Jen thought music would be distracting for me, so instead I sang out the one line I remembered from a song....over and over and over.  Then I just started making shit up.  When we stopped to take a photo I saw this awesome Landrover drive by. I had to spend the next twenty minutes reminding Jen that in the movie it always happens that the American woman is in some kind of trouble and saved by the handsome rich dude in the Landrover.  She didn't seem to understand the difficulty, which was clearly that there are two of us Americans.  She did get that there was no trouble.  I informed her the "trouble" could be simply that we were lost.  Geez, it's never this difficult in the movies.  So, after she professed she didn't want any man driving a Landrover (what an idiot she is), I had to continue on with my fantasy and even got so far as to name my hero,  Alec McGregor.   So don't be shocked when I don't come home.

We arrived at tonight's accommodations, Stonefield Castle, despite Jen's constant distractions while I was driving.  We are sitting in the bar, listening to some smooth jazz while Jen drinks some wine since she claims to be attempting to forget about the whole driving thing.

I am looking out the window, watching as the wind whips the vines climbing the castle walls.  It's actually quite romantic.  When McGregor gets here Jen is on her own.  She will have to drive the Kia back to town, and I'm SURE she will hit a curb or two.  Then she'll see this driving stuff isn't as easy as I made it look.