I am a big chicken.  But, there was a time I was less so.  I once rode down a gravel road on my GS and thought it was the coolest thing.  I had been cruising with dudes on street bikes who were slowly meandering down the gravel like a bunch of old ladies trying to avoid getting any dust on precious bikes then suddenly I took off in front and zip... like a rocket...I was flying!  Of course that lasted only until I was out of sight and hit a corner too fast and crashed and burned.  My only saving grace was I picked the bike up and continued on before anyone could catch up and see me standing there, turn signal in hand and bruise forming on my calf.

That was years ago...and two bikes ago.  And still, the gravel scares the bejesus out of me.  There's something about being on gravel that is now too intimidating, too frightening, too dangerous.  Given that, my 1200 GS hadn't been on more than 30 feet of gravel.  And Runkle, poor pathetic dual sport Runkle, had only seen driveways.
That was until last weekend.  Last weekend I was suffering from a lack of belief in people, justice and fairness.   So when I woke up on Saturday the only thing I could think of was to ride.  I packed up my Glock (because I'm also afraid of other things) and headed toward North Boundary Road outside of Lowell.  When I got to Lookout Dam I rode another few miles and was amazed at how such a beautiful, curvy road could be so close to my house. I had no idea.  The road turns to gravel and parellels the water, going past Lookout Point Lake Recreation Area and continues on and on.  There are very few cars along North Boundary Road which means as you ride squirrels run and birds fly along with you.  It is almost hard to concentrate as you check out the potential fishing spots and ponder if the next ride will allow time to fish and relax on the shoreline.

At some point you have a choice...keep following the gravel and stay along the waterline and head into Westfir...or shoot off on some random forest service road and see what waits ahead.  Given my state of mind, it took half a second for me to decide to leave the safety and security of the shoreline. 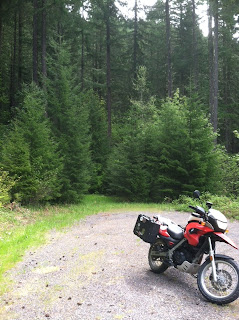 Eventually I ended up at a dead end...and when I got off the bike and looked down, I saw something that made me stop and wonder how we end up where we do.  Just the remnants of a blue plastic bag.  To some, that means nothing.  To a few, they know where I was and I'd what found.  I was at the end of the road.  Literally and figuratively.  I paused long enough to look past the trees and into the woods then hopped back on the bike to explore some more.

Unfortunately, I had things to do and places to be so I took a few more offshoots,  a few more photos then zipped back toward home.

It wasn't until I was safely back on the asphalt that I realized I'd just ridden more miles on gravel than I'd ever done in my life.  Alone.  And it wasn't scary but fun and liberating.  And peaceful.  It made me realize that no matter how awful life is, no matter what you face or who challenges you, as long as you keep moving, keep going forward, and keep facing your fears, it will be okay.  It WILL work out.

My lack of belief in people, justice and fairness...it's still there.  But now I am also suffering from a strong desire for freedom...the need to pack my camping gear and head southward...toward Mexico to live the dream I've always dreamed.  Or to head north and into Alaska to get lost and fight mosquitos, to fish in streams where the fish are so big and tough that I would scream like a five year old girl when I hooked one.

So bring it, Life.  Bring it.   I'm ready for whatever you can throw.