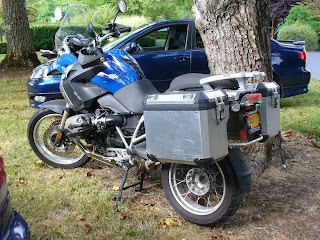 Just washed the Beast for the last time ever.  It now sits in the garage awaiting pickup this Thursday by a man who bought it after just looking at some photos and trusting things were as I said.  Obviously he's from Canada because you probably wouldn't find that in the States!

As I toweled off the Beast I noticed curves that I'd gotten so accustomed to seeing that I didn't even really notice anymore.  I took a quick trip down memory lane while I was wiping the last of the water off.  I fondly looked back to last May with Jerry and Rusty riding through snowy passes in Montana...scared to death I was going to spill it since I'd never ridden in such conditions.  In 2008 just after I bought it I took my friend, Kat for a ride and almost knocked it over at a stop sign when we got lost using the GPS because laughing our heads off since we'd already passed that same spot four times.   I remembered a ride along Hwy 14 in Washington following another rider as he pointed out with his foot a rock in the road...and hitting the rock since I was so distracted by his foot.   Later as we looked at the view he said, "Least you weren't stupid enough to hit that rock!"  I laughed at myself silly and so did he (he didn't have far to go).   I remembered countless miles flying up and down I-5 from Salem to Portland commuting to work...and how at least once a week there was a near miss but the Beast always had enough power to quickly get out of the way.

I've loved my BMW 1200GS.  I've loved the way it handles, the look, the power, the strength and the reliability.  I've loved that it's never let me down though wind storms, sleet and snow.   I've loved the way the BMW makes you friends before you even remove your helmet.  That strangers share stories with you about their bikes of the past and present.  I love the BMW club and their magazine (http://www.bmwmoa.org/).  It is because of them that  I can go anywhere in the States and I can find accommodations or assistance from fellow riders.   It will be a shame to see it go.  But, I think we part at a perfect moment in time.  We part when we don't have to simply because it's time for each of us to go our own ways.   I think the Beast will be happy in Canada with someone who will ride it more and probably wash it more often.  Someone who will love it just as much as I have.

And me, I'm already trying to figure out my next adventure and the bike that will get me there.  I look back fondly to my time with the Beast but I look forward to the future more knowing there are so many options  and different directions to take.

Maybe a Triumph Street Triple, maybe a KLR, maybe a Suzuki or a Yamaha FJR.  Who knows.  That's part of the fun...not knowing.