My new bike: Ooops! I did it AGAIN! 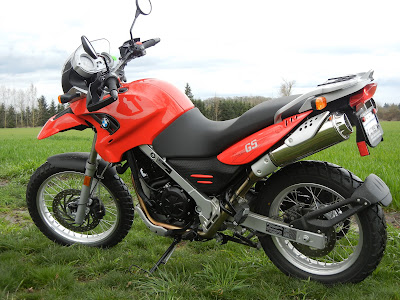 Stopped by BMW Motorcycles of Western Oregon (http://www.bmwor.com/) last week and found the bike I didn't know I was looking for.  Yesterday I rode the thing home and now it sits, happy as a clam in my garage.  I know some of you will be disappointed to hear I slinked back to BMW without even test riding my much coveted Triumph Street Triple.  But, once I saw this bike in person I really couldn't pass it up.  The bike is a 2010 BMW G650GS in what is probably known as some fancy version of red (with some orange thrown in for good measure).  I'm sure simply calling it "red" is an understatement.  The bike had a total of six miles on it as I rode it away.  ABS, center stand and heated grips came standard and I forked over some extra green to get the grip guards (which were in stock thankfully!)  Thanks to BMW of Western Oregon I'll be getting my 600 mile service for FREE (now that's a deal) and I did get 10% off the price of the guards.  The bike itself was priced reasonably as the 2011's are already on the shop floor.

I've learned from my previous mistakes and did not spring for any side cases. My plan is to try this bike  the "light and easy" way and get a Giant Loop Great Basin Saddlebag (http://www.giantloopmoto.com/) and compliment that with the Giant Loop Fandango Tank Bag.  This bike is lighter and more maneuverable than my previous 1200 GS and I don't want to lose any of that by adding weight with hardcases.  In the short term, I'm stuffing things inside my jacket and riding around like a black and blue Pillsbury Doughboy.

This bike is actually my second 650 GS (or third considering I previously bought the same 650GS twice) so I'm familiar with the ride and feel.  However, this time it's going to take some getting used to as I've grown accustomed to the 1200GS and the POWER of it.  Currently it feels like I'm back on a Vespa, putting around the 'hood weaving back and forth down the street with a silly grin on my face.  Of course, the grin probably IS there.  I've only put 50 miles on the bike thus far but I can tell you I miss the power and the fact that every little bump in the road didn't vibrate from the tires to the handgrips to your eyeballs.  And the wind...oh how much more wind there is!   But, I think this is a bike that "fits" me much better.  No more climbing onto the thing, no more pulled muscles throwing a leg up and over a 48" spanned rear end (not mine, the GS plus hardcases!).  And a bonus I hadn't counted on is the insurance is only $233 a year!

Since this bike is easier for me to maneuver and lighter, I've already taken it places the 1200GS never went.  Trout and I took it into the field on a slow ride to the back '40.   I was sliding around like a kindergartender on a slip n slide but not once did it cross my mind that I couldn't keep it upright.  Frankly at the speed I was going I had a better chance of being abducted by aliens than I did of dropping the bike.  After my attempt at coolness in the field (I hope no one saw me), I spent a good hour hosing off the mud and wiping the thing down so water spots wouldn't show.  Yeah, I know, a little overkill but still, it's my new baby!

Hoping to ride with some friends to Alaska this summer and you can bet I'll be riding where ever the wind takes me.  Thanks BMW of Western Oregon, again, for the awesome new toy.