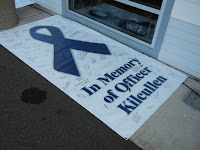 Last month I had the pleasure of tagging along with 250 fellow motorcycle enthusiasts on the Chris Kilcullen Memorial Ride (http://www.chriskilcullenmemorialride.webs.com/)  which was organized by Brian Antone (Springfield Police Department).  The event raised money for Kilcullen's wife and two girls and covered 248 miles from Eugene, OR to Sisters, OR.  The number of miles, 248, was a tribute to Kilcullen's badge number.  I've gone more than 248 miles in one day but never had the privilege of doing so with 250 other riders.

My first thoughts of the day?  Simply, "gosh I hope I don't make an arse of myself."  Which, of course, I promptly did by forgetting to put up my kick stand while attempting to pull out behind the minivan which was our pace vehicle.  Hey! Guess what?  I killed the bike and thought I heard one of the Harley rider's yell, "Kickstand!"  If that's not making an arse of oneself, I don't know what is.   Things improved from there until I ended up following about five riders who appeared to have gone a different way from the pace van (later I found out the van actually took a wrong turn).  It was at that moment, only about a half an hour from my house, where I thought, "I can just go home, no one will notice."  But I kept on and eventually we ended up in Sweet Home, OR.  I was amazed at how many bikes filled the parking area (Thanks, Sweet Home PD).  Upon leaving Sweet Home I tried to stay with the van and ended up cutting some Harley riders off.  Oops.  My bad.  That left me with some choice words for myself, and I actually thought, "Thank gosh there are police officers present just in case I have to kick some butt."  Okay, really, I thought, "I hope those Harley riders forget the color of my bike before we stop in Sisters."  Turns out those Harley riders are awesome dudes and dudettes and I had nothing to worry about.  But, I would by lying if I told you that cutting off a bunch of leather clad Harley riders didn't give me pause.  I had ample time to consider my actions and actually thought about throwing myself at their black leather boots and offering to lick them clean.  Thank goodness that wasn't necessary.


I have never been around that many riders before and I can't see myself doing it again unless I have the privilege to do this ride again.  I'm more of a "lets take our time and check out the scenery" rider who likes to go fast or slow, depending on how the spirit is moving me at any given moment.  Trying to keep up with others is torture for me.  When I do that, I feel like a 90 year old who is going to have a heart attack at every corner.  I worry about the people behind me and the people in front of me.  Heck, I even worry about the people a mile away.  I ended up at one point trapped behind a Honda scooter riding dude (seriously) who for some reason waved others past but didn't wave me by.  I wondered if he could tell that I was a girl or if he just thought I'd eventually get tired of following him and go home.

When we arrived at Sisters (Thanks Sisters School District for the parking area) there were many many bikes already there.  There were Hondas (more than just the scooter dude) and Suzuki's, Yamaha's and Harleys.  There were even a few bigger BMW's, not many, and we were all outnumbered by the Harleys. One guy even had a dog on the back of his bike.  If that's not cool, I don't know what is.  I can picture Trout on my bike and think she'd probably want to be in control of the throttle.  Needy, greedy lab.  A leisurely lunch at the local pub with some great gals who actually tolerated me was followed by a  relaxing time lounging in the grass, hanging out and chatting with our new found friends.

On the ride home I cut away from the pack and headed to Salem while the rest went on to Eugene.  I waved goodbye and smiled for the next fifty miles, thinking of how great it was to  be a part of something for such a good cause and counted my blessings. I had met some wonderful people who made me laugh and consider possibilities I'd never pondered.  One thing I learned was that waving constantly to other bikes makes your arm hurt, but more importantly I learned that it's not important to keep up with the crowd but to forge ahead at your own pace.  I also learned not to be so judgmental of others.  I mean, just because they aren't riding BMW's doesn't make them bad people.  In fact, the Harley riders who stayed with the van were great people.  Ones I'd be proud to call my friends.

So here's a shout out to everyone who joined the Memorial Ride.  Kudos for taking the time out of your day to share stories and laughter.  A big THANK YOU to those who helped raise around $10,000 for the Kilcullen family, a HUGE tip of the hat to Brian Antone for putting the ride together and for the volunteers who checked everyone in at the start of the ride, and a heartfelt hug to those special Harley riders who showed me it's not the color or brand of your bike that matters, but that you ride.

Email ThisBlogThis!Share to TwitterShare to FacebookShare to Pinterest
Labels: BMW, Ride Me