Prepping for the directionally challenged.

I'm calling what I'm doing prepping since "planning" seems like it would require a spreadsheet and some maps.  I am more of a "throw what you can into a bag the night before" kind of gal.  But, I do realize there are some things I need to ensure are done before my trip.  One, that the bike is up to date on maintenance.  Since I just got my 600 mile service done about 400 miles ago, I figure the bike is golden.  I still have to grab some grease for the chain and a good tire pressure gage, but other than that I'm calling it good on the bike prep aside from the bags I'll be carrying.

Two, I need to avoid getting lost.  Since I practically get lost just walking to my mailbox I figure one of the most important things I can have on my moto trip is a GPS.  I hate to admit it to ya'll (just practicing the lingo), but I am too cheap to buy a nice and expensive GPS specifically for my moto.  I mean, I have one for my personal car, one for the work car and one for the phone.  Do I really need to shell out big bucks for one specifically for my moto?  I think not.

I contacted BMW Motorcycles of Western Oregon http://www.bmwor.com/ and spoke to Scott (owner) on the tele about what I would need to use my Garmin Nuvi GPS.   He was quite nice and I was impressed with his willingness to help.  (This store has some great people working, but there are times when I feel like they don't have the time to help me, so trust me, this was refreshing.)  I told him I'd stop by the next day and see what he had to offer. 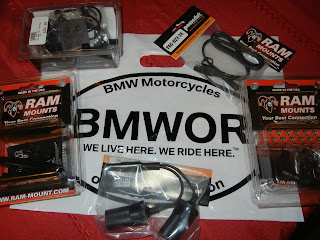 When I arrived Scott actually had about six different things all tucked safely in a box with my name on it.  Basically, he said I'd need some RAM Mounts http://www.ram-mount.com/ in order to make the GPS fit appropriately.  I'm glad Scott was there to help.  Frankly, I would have been lost (see how directionally challenged I am?).  Apparently the RAM mounts come in pieces, a double socket arm, a base, a round base, a connector to the bike's handlebars.  Really?  They can't just put all the stuff you need in one nice package and call it good?  Scott actually walked me over to a BMW GS and had me sit on it.  He showed me how everything was going to hook up and how to position the mounts. We talked about the GPS and also how I'd be carrying my cell phone and possibly an Ipod.  Scott suggested I use an SAE cable that would fit right into the SAE cable that BMW Motorcycles installed before I bought my bike (thanks for that, by the way, it's a great addition!).  This would help me avoid using the socket that came with the BMW and eliminate a cord hanging down the side of the bike.  Scott was also nice enough to bring up the fact that I could purchase a SAE connector that had two sockets, so I could charge my GPS while also charging my phone or other items.  (Seriously, I probably wouldn't have thought of that until I was on the road.)  He even suggested I get longer screws for one of the mount pieces, just in case.

Scott also brought up the fact that if I didn't like the mount set up I could always use a tank bag and put the GPS in the map pocket.  He even took the time to show me a few different tank bags.  This was definitely not the service I was used to so when everything was rang up (mounts, not a tank bag), despite the price of $96.00 I felt like I came out ahead.

And,  $96.00 won't bother me at all when I'm on a road surrounded by nothing and hear banjos playing and pigs squealing.  Knowing which way to turn to get out of there will be priceless.


Thanks to Scott from BMW Motorcycles of Western Oregon for taking the time to help!
- July 17, 2011