Today started much like any other day on this vacation.  Get up, eat some sub-par Scottish breakfast, drive to a few castles, see a few graveyards, and then settle into a castle suite for a night of relaxation.  We also drove past Loch Ness, searching for Nessie, but as with most tourists, we were sadly disappointed as Nessie decided to stay hidden.  Damn her, that wench. Does she NOT realize who I am?

Today was All Hallow's Eve and Jen and I were staying at Tulloch Castle in Dingwell, Scotland.  Tulloch was featured on Ghost Finders Scotland (http://www.ghostfinders.co.uk/tullochcastle.html)
in 2004.  According to the paranormal investigators, they saw many orbs which are generally interpreted as paranormal phenomena such as spirits, ghosts, auras, angels, energy fields, etc.  Basically, an orb appears to be anything you want it to be.  These "orbs" are not verified as spirits, and really, it seems almost impossible to do so.  However, seeking the mighty orb was our goal...and we headed off much like Charley Brown searching for the Great Pumpkin.

The Castle itself was a little scary.  Not yet fully remodeled and lacking in even basic lawn care, the place was reportedly going to be the castle in the worst shape.  It wasn't.  Tulloch Castle is safely my favorite accommodation as of yet, despite the shoddy landscaping.  In the lobby there was a nice fire and our room was adequate.  The only thing I didn't particularly like was the "attic" space opening in the middle of our room.  That's not really what you want to see when staying in a haunted castle.  Especially when I'm usually so paranoid about the room in general that you know I'm gonna have to open the attic space and check it out.  I pulled a chair over as Jen was questioning the need to do so.  My argument:  wouldn't you like to know there's a boogyman above us BEFORE he kills us?  Mercifully, I found out that the space below the floor above us and the attic door was only about a foot tall and riddled with wires and other objects.  I believed this space was too small for a man to hang out and wait to kill us.  Maybe a boy could do it, but I had every reason to believe I could kick any small boy's ass (and would without any qualms if the little bastard came out of the ceiling).  And anyhow, thankfully, Jen's bed was closer so I also reasoned I would have time to escape while she was being raped and tortured (kids grow up so fast, you know).  There's also the fact that I can run like the wind when needed.

Our first orb search was in our room,  number 5.  We turned off all the lights and used the camera's flash to attempt to pick up some elusive spirits.  We found one orb which had settled in near my backpack.  Jen swears there's a face in the orb.  Me, I see something, but I'm not willing to say it isn't a dust molecule.  Still, ghost hunting is fun.  Our next trek was around the Castle.  We found a large door that was shut and we didn't know if we were supposed to go inside that area, so I leaned down and peered through the keyhole.  I didn't see anything other than another room, which I quickly relayed to Jen in a whisper.  However, as I was leaning down, squinting, the door started to open on my face!  I backed up quickly, my heart beating like I was being attacked by a hungry gator.  Suddenly there was a maintenance man looking at me saying, "I thought you were a ghost!"   He quickly walked away and I attempted to rein in my heart as Jen laughed and laughed.

Outside we met a couple from Glasgow who had a cheery cattle dog named Xander.  These were the first people who had spoken to us since we landed at Edinburg, and frankly I wasn't willing to leave them be.  We ended up befriending them, Laura and Walter, and spent the rest of the evening basically searching for ghosts, eating in the pub, comparing ghost orb photos, and laughing about how chicken Walter was (his plan was to run if he saw or heard anything and to sleep in the car with Xander).  Laura and Walter were in room 8, which is reportedly one of the most haunted rooms in the Castle.  Booooooo.   We ended up in their room, the lights out, flashes going off, in search of this ghostly entity who apparently had in the past held a man down as he was sleeping.  No such luck.  Apparently the ghost wasn't too fond of us.  Laura was a real hoot.  At one point we walked past room 15, another of the more haunted rooms...and she tried the door and (holy shrat, Batman) the door swung open.  We all giggled like school girls as we tried to push each other in and took photos in the dark.  Hmm, I may be mistaken but I think Jen the Mighty Ghost Hunter stayed in the hall until the lights were turned on. 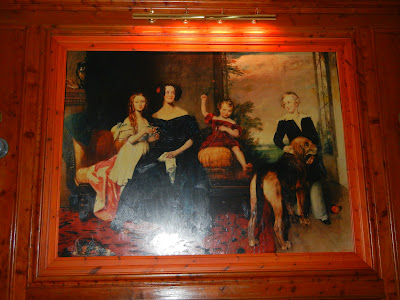 At 9 pm our new friends and another couple met in the lobby for a ghost tour of the Castle.  The tour included the dungeon (where people were buried under the floor alive and others simply died! Death in a dungeon?  Wierd) and the opening of one of four hidden tunnels (caved in so we could do nothing other than peer into a shallow pit).  We also were taken to the Great Hall where a photo of the landowners still hangs on the wall.   The story goes the photo now is of the wife and her children.  The black spot behind the little girl on the left is where the husband used to stand.  The man apparently had  a wandering.. um..penis...and he liked to bed the chambermaids.  One day as he was deep in the...um..chamber maid... the little girl walked in and found them.  Distraught, she ran out of the room and fell down the stairs and to her death!  Later, the man was found hanged near the front gate of the Castle.  No one knows whether the man hanged himself out of shame or if the townspeople hung him (my vote is on the townspeople).   The mistress of the house is apparently the famous "Green Lady" ghost who walks the Castle, still in sorrow for her losses.   Of course we didn't see her...though we looked!

As the ghost tour ended Jen and I went back to the Great Hall again by ourselves and I snapped a few photos.  If you look closely you can see the multiple orbs in my photo...which were not on the subsequent photos.  Clearly I'm a much better ghost hunter than the TV show.  (If you'd like a copy of my orb photos, please inquire.  For the low price of $9.99 I will send you all of them so you can investigate...I kid!  They are FREE!  Hurry! Before the orbs disappear.)

On the way back to the room for the night Jen and I stopped by room #15.  No one was there, the door opened fine, and no orbs showed up on my camera.  Maybe the ghosts were still partying in the Great Hall???  Back in our room, tucked safely behind the door, Jen was getting ready to stay up all night out of fear.  Me, I jumped under my hobbit bed covers and was ready to slip into dreamland (which, by the way, turned out well since in my dream Ryan Reynolds and I were getting along just fine...but that's a story for another blog).  Jen walked to the bathroom, opened the door, closed the door, opened the door, asked if I could sleep with the light on all night (to which I replied, "hell no"), shut the door, walked to her bed, walked back to the door, opened the door, looked at me with pleading eyes and begged for the light to stay on all night long (answer was still "No" but this time accompanied a severe rolling of my eyes), walked back to her bed, back to the door, and then finally closed the door and decided the door was going to be shut while she stayed awake in fear all night.

And the Mighty Ghost Hunter, Jen, did stay up until 1 pm when she finally turned off her iPad and hid under the covers all night.  She claims at one point I woke her up by snoring but she doesn't know when since she was too afraid to look at the time.  I contend it wasn't me snoring but a ghost.  That's my story and I'm sticking to it.  Ryan Reynolds wasn't bothered by my snoring (and that's all I'm sharing about that).