Ireland/Scotland: 11.1.11: My own Tibetan Spiritual Walk of Enlightenment


Today was a very good day.  We started out with the same Scottish breakfast from hell and chatted up our new friends, getting the necessary emails, candybar lists, and facebook contacts so that we may continue to share in all that is giggly and ghostly.  Earlier I had read there was a graveyard at Tulloch Castle and wanted to check it out before we left.  The front desk person had no idea how to get there (what service) so passed me off to the maintenance man.  He said his wife took him to the graveyard about two months earlier and it was really nothing to be impressed with.  Still, he walked me outside and pointed in the direction and gave me some “country directions” that people who know their way around their hometown give.
Maintenance Man: “ Wander down this lane until you get to the field that’s not a proper field just past the trees.  The kids ride their motorbikes there.  Go diagonally through the field and at the trees the graveyard sits.  It’s overgrown and you won’t find it.”
Hmm.  Didn’t fill me with confidence.
Maintenance Man:  “If you want a real treat walk up this steep field here full of sheep, past the other steep field with sheep, and then go through that little clearing and up that big hill and you’ll find a mini castle built just for fun.”
Hmm. Ok, why not?
Jen didn’t want to tag along, something about actually having to walk and her not being impressed with the whole idea of another graveyard, I think.  These aren’t normal graveyards.  They are old and full of Keltic crosses and history and toppled headstones and...yeah whatever.  She stayed behind and read her iPad.  I did tell her if I wasn’t back in a few hours she should send out the local mounted sheep patrol to find me.
I decided to hit both the graveyard and the mini castle.  I mean, why not!  The maintenance man was impressed with my attitude and wished me luck, reminding me again the graveyard sucked and I wouldn’t find it.  (Nothing like a cheerleader to keep you going!)   I think as I walked away he was telling the other guys working outside that the dumb American was going to get lost and they should prepare the sheep patrol.
I started walking down the lane and noticed a guy walking his dog in front of me.  Hmm...serial killer or simply a man walking his dog?  I mean, really, if I disappeared no one would even know where to look.  And how long would it take before the mounted sheep patrol (MSP) even started to look?  And if it were one of their own who murdered me, would they even take it seriously?  Another tourist gone?  Who cares.  Hmmm  maybe I should have given Jen a better idea of where I was going first.  I started imagining me being attacked and throwing my red camera so the killer/rapist/boogeyman wouldn’t find it.  Surely a search party would find my camera and be able to tell where I’d been and that the man in front of me was wearing a red shirt and had a black dog. 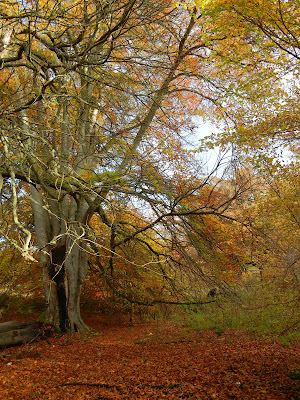 Finally I decided it was too beautiful to worry about trivial things like me being attacked.  In fact, I was kind of hoping some of the motorbike kids would come along so they could take me for a ride.  I only hoped it would only be one kid and not a gang of future sheep herding felons.   I could handle one.  More than one and I’d have to run for it.  In my white trainers.  They would get dirty.  Probably best just to strip naked and scare them to death.  Turn around is fair play.
I walked under the trees, diagonally across the field and noted how lovely it was there.  The birds were chirping (little arsholes were flittering all over and scaring the shit out of me) and singing wonderful songs that sounded a lot like the theme from Texas Chainsaw Massacre.  I was snapping photos and enjoying my walk when a man suddenly stepped out from behind a tree and his dog came running over to me like he was going to jump on my face and eat it.  The man was more frightened of me than I was of him, despite my paranoia.  I asked him about the graveyard and he said he walked his dog in that field for years and had never seen a graveyard.  Drat.  Maybe Maintenance Man was right.  Damn it.
Still, undaunted, I carried on.  And walked directly over to the fricking graveyard.  My first thoughts, “Take that Maintenance Man with no faith!  Take fricking that!”  My second thought:  “Shrat, this graveyard sucks.”  There were only three visible stones and an ugly newer wire fence around them, which simply would not do for the expert photos I’d wanted to take.  (Somewhere between Edinburgh and Loch Ness I’d decided I was a champion photographer and in advance I apologize to those who actually are.)  So, after a quick look around, I was tromping back through the trees and field toward the three hills and sheep.
Walking under the trees, the gold and red leaves scattered along the trail like rose petals toward Ryan Reynolds's bedroom (ok, I kid, we don’t have to be in the bedroom), I felt so at peace.  It was as if all the negative energy was being sucked out of me (it’s amazing I could still stand upright) and I suddenly realized that life really is beautiful (there were some other epiphanies but you don't need all the details, they may scare you).
I crossed the lane and looked one way toward the way I’d come and then looked up toward the hill and thought, “I am not fecking walking all the way back the lane so I can walk up three hills and then cross back across that damn field”  (Okay, not all the negativity was gone and really I was just trying to save time.  Yep.  That’s my story).   So, I did what any great hiker would do, I forged my own trail.  (Actually I took a sheep trail through a ditch and climbed over my first of seven fences...those sheep are nimble!)  As I walked through the field I cleared my mind.  I pushed all the “what if’s” away (although I was still kind of wondering what I’d do if the landowner rushed out with a gun and tried to shoot me for trespassing), and I started simply thinking about the green grass, the hillside, the trees, the water flowing past in the adorable little stream.  Birds were singing (this time they were singing Pink, Perfect!) and the sheep were staring at me and slightly running away but I’m sure they were just trying to give me space to explore.
By the time I got through the first field I was feeling good.  The second field made me wonder why I didn’t do more cardio.  And the third field, I thought (through coughing fits), “I’m almost there! Bring out the champagne and chocolate strawberries!”  (Okay, you got me, I was actually wondering why the hell anyone would put a fricking castle on top of this hill when it wasn’t even a full size castle.  How daft!)
Eventually, by following the sheep trail, sheep poop, fence lines, cow chips and power lines, I glimpsed the castle.  And it was beautiful.  It stood on the top of the hill, one window built in the shape of a cross, a tiny little arched doorway with a small wall going to the mini guard’s house...all of this spoke to me.  It said, “Turn around and look at the view, Dumbass!”  So I did.  And I saw for miles.  And miles.  And I suddenly understood why someone would put a tiny castle at the top of the biggest hill, overlooking all the people and the sheep and the town.  Because they could.  Hell, I wanted to build a mini Taco Bell right next to it so I could have an ice cold Pepsi. 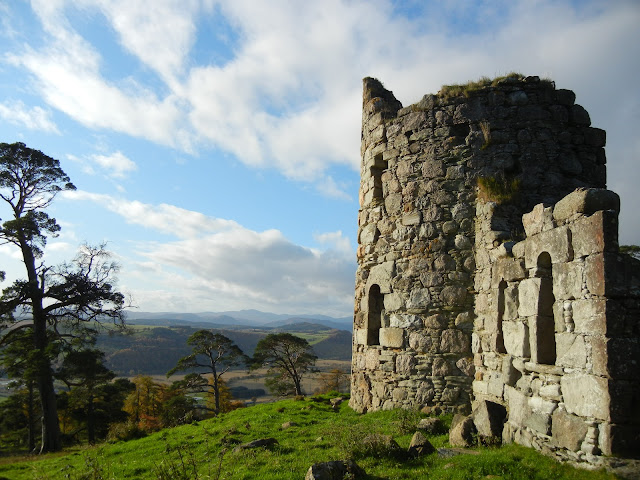 But, in truth, as I tromped down the mountain after taking some more professional photos, I realized that this morning of hiking, of exploring, of climbing over fences, dodging sheep poop and hearing the goosh of my wet trainers was what living was all about.  The morning couldn’t have been better.  Life was perfect.  I wasn’t missing anything at all.  I wasn’t worried about tomorrow, or even later that day.  I was simply living in the moment with no expectations and no room for disappointments.  I realized my life would be perfect if I just kept feeling that way.  If I could just be satisfied with today and not worry about tomorrow.
Once I made it down the hill the friendly couple yelled out to me, asking if I’d found the castle.  I said yes and showed them my photos.  They were gracious and wonderful as we looked at maps and they gave me tips on what castles to see and what towns were their favorite.  They were only the second Scottish people who actually were kind.  I was thankful for them and smiling as we parted ways.  As I walked past the maintenance men who were still working in the side yard, one of them asked if I’d actually made it to the castle.  I smiled my biggest white teeth smile (which actually garners compliments from strangers...watch me work it...uh huh bow chica bow wow..) and said, “Why yes I did!”  He laughed and said congratulations...but deep down I think he was a bit disappointed that the mounted sheep patrol wouldn’t be going out today.
- November 02, 2011