The American Royal World Series of BBQ is a yearly event held in Kansas City, currently located at the Kansas City Speedway. The Royal is in it's 39th year and is an official Kansas City Barbeque Society (KCBS) sanctioned event. As a KCBS judge, I get the honor of paying my airfare and other expenses to KC but get to taste all the bbq my stomach can stand during the competition when we are judging.

I'll give more details about how to become a judge in another blog...but until then, I'll keep rattling on about the American Royal.

The American Royal is the biggest bbq event in the world (according to their website)...and I can promise you the event was HUGE.

There were so many people on the infield, it was like walking around the biggest bbq store in the world. The vast array of bbq's that contestants were cooking on was amazing. Every brand you can think of was represented. I took some photos of a few to show you the realm of possibilities. 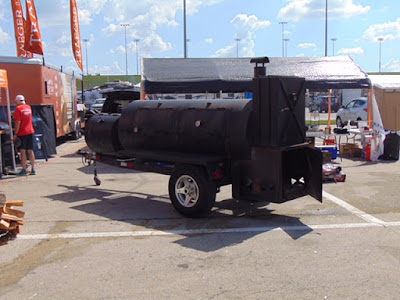 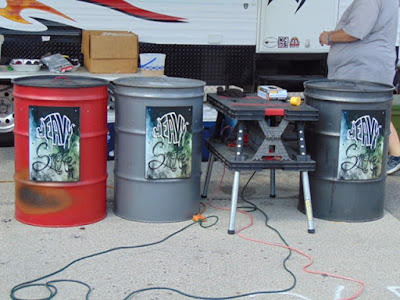 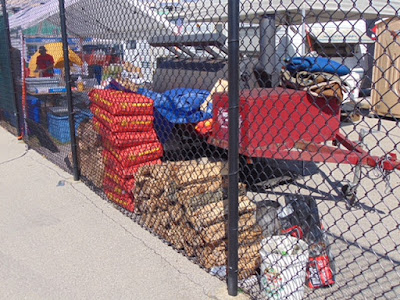 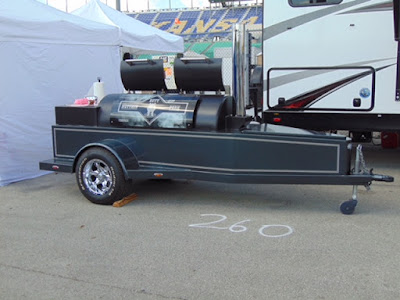 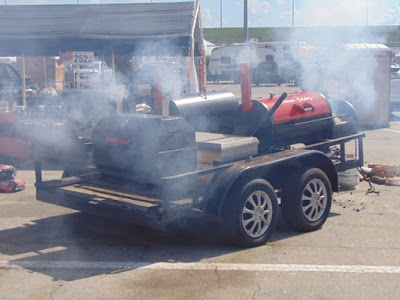 I guess on Friday nights there is some stuff going on...cooking starts...and from what I hear, there's a wee bit of drinking that may go on...(I'm hoping to confirm this next year, wink wink). On Saturday there is an Invitational competition, and only the best of the best participate in that event. Those teams are ones who have won a Grand Championship..and they not only participate in the invitational but also in the Open Meats competition on Sunday.  There is also a "Sides" competition that includes beans, veggies, potatoes, and desserts. Lucky is the judge who gets to evaluate ALL the events!

I was chosen to judge the Open Meats and Sides competition. I arrived early so I could walk around and check out the entire festival which includes music, food and bbq sauces for purchase, and a lot of free samples of bbq and sides. Guess what? It was hotter than Georgia asphalt so getting there early was a bad idea. By the time I walked from my air conditioned car, to the speedway entrance, down the bleachers, across the speedway, then across the grass and to the infield, I was sweating and in need of some seriously cold water and a chair. People everywhere were dripping sweat and taking it all in like champions...while I whimpered and begged for shade.  I'm sorry, but Oregon doesn't get that hot or humid. I'm a delicate flower. I found shade (right before I passed out)..straight from Salem, Oregon!

I met up with Mike White and his wife who had a booth..and they kindly invited me to stand in the shade for a spell.  If you are in search of some awesome sauce, check out their website: Best Damn BBQ Sauce you won't be sorry. I found these guys at the Salem Wednesday market earlier this year and brought samples of their sauce back to my office...it was a hit. Their Sweet Lady Love and Hot Damn That's Hot sauces are perfection in a bottle. Buy some.  Buy a lot!  They are champions. Literally.  Their Sweet Lady Love sauce took 1st place at the Royal once... That's impressive stuff.

Saturday's judging was for sides and desserts. The sides our table tried included a really bizarre mushroom sandwich thing (not my fav, I hate mushrooms); a "veggie" open faced sandwich with cheese, bacon, zucchini, and other veggies; cream cheese stuff jalapeños; and a green pepper stuffed with corn and zucchini.  In the sides competition, there is no real rule other than there can't be more than 7% meat in the dish. Obviously, that's pretty subjective.

After the first course, we tasted about six different type of baked beans followed by a round of potatoes...which included a lot of mashed potatoes and one potato salad..which was a rather disturbing color. I think sides would be a very difficult thing to make since not everyone likes all sides...and trying to be original can be difficult when there are over 200 entries.

Once we got to the dessert section our table was filled with anticipation for the judging to start...except one judge who declared he did not like cheesecake...what a fool.  (I kid, he was actually pretty cool and his wife liked cheesecake so it's all good). 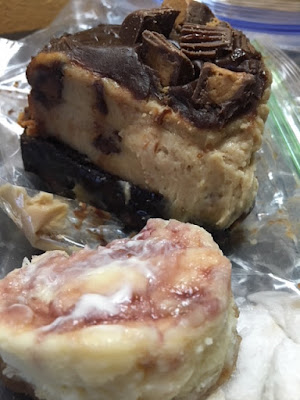 I'm a cheesecake fanatic...so imagine my shock and awe when we got to judge a peanut butter and chocolate cheesecake, a raspberry one, and a pumpkin one!  I was all giddy like a fat girl ijudging BBQ (Oh wait...snap. Must stop eating.).  Anyway, we also tasted some pumpkin shake/smoothie, some cake balls, and an adorable lemon/whip creamy thing that would have been fantastic if I liked lemon even a little bit.

Sad but true story here:  we are NOT allowed to take any photos while judging. In fact, our phones have to be tucked away completely...but we are allowed to take home what we don't eat...so the picture here is a fantastic piece of chocolate peanut butter cheesecake  and raspberry cheesecake after they've been smashed into a ziploc bag, pushed into an ice chest, thrown into the back of a car, and then driven 20 miles in 90 degree heat with what felt like a wall of humidity.  I'd say it still looks delish given what it's been through.

After all that food, I drove myself back to the hotel, carried my smashed cheesecake to my room, flopped on my bed and didn't move for 12 hours (except to reach over and take another bite of cheesecake).