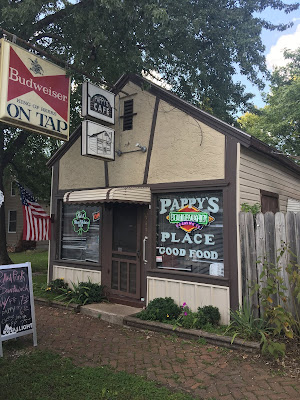 Pappy's Place BBQ was recommended to me by my hosts at the B&B so before I left town I stopped by to see if the fuss had any merit.

Pappy's is a tiny little bar that sells BBQ. It's apparently well known for it's pulled pork sandwich, so I ordered that from a man behind the bar that turned out to be friendly despite his initial look up and down of me. (I'm pretty sure in his mind he was asking what the heck I was doing there and why the hell I needed any more food since I've gained about 50# since being in Missouri. Shut up.)


Food came out fast. Lightening fast. So fast it made me think their microwave must have already been loaded. While sitting at the bar, I opened the wrapper to find a pale pulled pork sandwich that was already sporting a soggy bun.  No way this was gonna make it into my belly.  I took a few finger pinches of it to taste and just as I imagined, it wasn't all that great.


I paid the man, grabbed a jar of BBQ sauce to go (just in case), and headed to my car...where I ate some more of my Buckingham's BBQ.  I'm normally a "small, out of the way, dive joint" kinda gal, but this place should be reserved for drinking mixed drinks from a dirty glass when you've just been dumped by the love of your life or when your dog gets ran over by the UPS man. It happens.

Email ThisBlogThis!Share to TwitterShare to FacebookShare to Pinterest
Labels: BBQ