After leaving the non-haunted Bed and Breakfast, I couldn't really figure out what I wanted to do or where I wanted to go. It's the downfall of not having an anal retentive friend traveling with me. Normally, when Jen is with me, we have a huge spreadsheet with places, addresses, tips, and times the places are open. When I travel alone, I have a general idea of the direction I want to go...and I go. In this case, that was an issue.  But, my redneck roots took over and I thought, as long as I was in the national headquarters of Bass Pro Shops, I may a well visit them. So shopping I went. 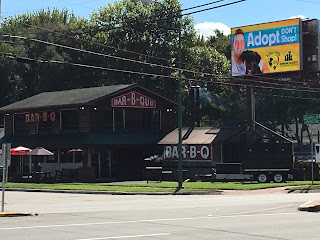 After I spent money on crap I didn't need but that looked cool, I was in the parking lot trying to figure out what next when I looked up and saw the most beautiful site. Across the street was a BBQ joint! It was like the heavens opened up and the clouds parted...and I knew, just knew, it was fate. From where I was, I couldn't really tel much about the place...I wasn't too fond of the huge digital sign in front that grabbed my attention away from the important things...but luckily my brain was able to focus on the big BAR-B-Q words and I headed that direction. Turns out, it was the best move I'd made thus far in Missouri. 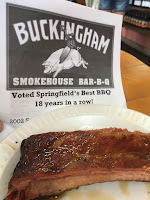 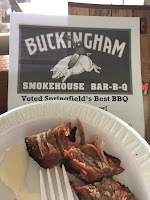 I had found Buckingham Smokehouse BBQ. Buckingham's in Springfield, MO is a branch of 5 BBQ restaurants in Springfield, Nixa, and Ozarks, MO. I'm a pretty flexible BBQ eater, so typically when I'm trying out a new place, I'll walk in and just ask them to serve me something they are famous for. In this case, I was greeted by a tall dude with such a peppy attitude, I seriously wanted to just hang out all day. I didn't get his name...but when he asked me where I was from (no idea how he knew I wasn't from MO), I told him I was from Oregon. His response was "We get people from all over but never as far as Oregon!" and he handed me a plate of burnt ends to try with some mustard BBQ sauce and some horseradish BBQ sauce. I have to admit, I've never been a fan of mustard or horsey sauce, but this stuff had me almost licking the plate.

We got to chatting and I told him I was in town to judge the American Royal...and he started telling the cooks and everyone that I was a BBQ judge and then the dude brings me a free rib, too! It was the nicest anyone has ever been to me.  Maybe I need to get out more, but seriously, this fellow was awesome. And the rib was perfection, just as the burn ends were. I went ahead and ordered burnt ends and two sides...despite the fact that I was planning on stopping for more BBQ soon...and I have no regrets whatsoever. The baked beans were so good...and the corn was perfection as well. In Oregon, we don't put cheese on our corn, so at first, I was a little hesitant but guess what? Cheese DOES make everything better. 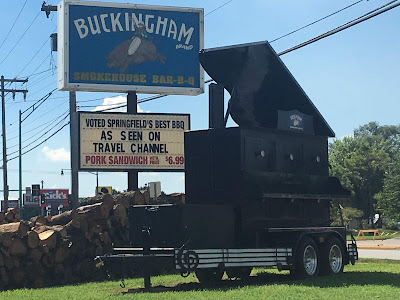 Turns out, Buckingham BBQ did a stint on the Travel Channel for a show back in 2015, and it's still the talk of the place and on their billboard outside..but they have reason to be proud. This BBQ is top notch. Its so good I'm taking some burnt ends home to Oregon so I can enjoy Buckingham BBQ again...to my pals at home, good luck prying any of this out of my fingers.


While at Buckingham, I ended up chatting briefly with some other people who were visiting the place for the first time.  Our conversation basically included the phrases, "This is so good," "OMG, this is awesome" and "First time here too?" They were gracious enough to let me take their photo and post it here. I told them it was for my blog, I neglected to mention I'm not a famous blogger.


Remember I told you about the very friendly, enthusiastic, awesome dude at the counter? He posed for me too!  He's totally smiling, can you see it???


If you're around Springfield, MO, or any of the other locations, do yourself a huge favor and stop by. Everyone in this state is thrilled with burnt ends...it's ALL about the burnt ends...and this place did them the very best.

Email ThisBlogThis!Share to TwitterShare to FacebookShare to Pinterest
Labels: BBQ