Friday night to welcome me to Texas we headed right to a BBQ place in the sticks called Cagle Steaks.  It wasn't the best place but since I refused to put on jeans in the heat (around 104 degrees at 7 pm) they conceeded we should go someplace less fancy.  Cagle Steaks was like an adventure park with a saloon and a gift shop and rustic boardwalks.   All I can tell you is it was around $19.00 per person and we ordered steak that came with a baked potato.  There was a "buffet" full of baked beans, potato salad, peppers, and other assorted goodies which we piled high on our table.  The entire table was full of food and we all sat and ate until it felt like we were going to puke.  I'm not kidding when I say the word "purge" was mentioned numerous times.  By males and females.  Texans know how to eat and eat well!

After an awesome night's sleep on Friday night in a comfy bed (how could I not sleep well with a calf in my belly and a potato farm keeping it company) I didn't want to wake up at 6:45 AM on Saturday morning.  But, I somehow managed and Sonny, Cher and I jumped in the car and drove the 5 hours to Fort Worth/Dallas.  Call me crazy, after six days on the bike somehow riding in the car for 5 hours one way didn't sound that bad.  However, it was a LONG drive.  And, as some of you may be aware, Texas is the place for good BBQ but scenery, well, that's where Texas falls short.  At least this time of year, when the temperatures are high at 109 and low at 100.  The grass is brown and sharp as needles and the green only comes from trees that seem to be reaching out to you in order to suck the water from your pores.  Along the route I saw cows, fields, some more fields, and gas stations.

DISCLAIMER:  Before you read any more I should warn you.  There are several reasons I LOVE Texas but its a toss up which reason would be first on my list.  I think the people are awesome.  The Southern charm and manners is a welcome change from Portland's rush and rudeness (yeah, I said it, suck it, Portlanders).  But, the food, oh the food, the BBQ, the TexMex, the great burgers and steaks, the green chilis and the tea, well, that's what I focused on during this trip.  So what follows is a quick look at Dallas and Fort Worth via food.

In Dallas we hit Chuy's (http://www.chuys.com/)  for lunch.  We found Chuy's about five years ago when Cher and I took a car trip from Albuquerque, NM to San Antonio, TX and some guy I'd met suggested it.  Chuys is now and has been since,  one of our favorite spots...hand rolled tortillas, spicy and flavorful Hatch green chili sauce, the margaritas and the salsa fresca...I may turn the bike around right now. If there's a Chuy's within a 100 mile radius, I'm making the trip.  Come temperatures that melt your boots, floods that threaten to take your bike away, and crying babies, I'll be there.  After gorging ourselves so much we could barely walk, Cher had to go to a dress fitting (yeah, great idea, stuff a bunch of food in yer gullet then head to do a fitting, heeheheh).   Sonny and I drove around until we found Chocolate, a shop in a trendy part of Dallas where we proceeded to stuff more crap in our mouths (how? I have no clue, but trust me, it was a bad idea).  We each had a banana and mango smoothy and a piece of hand made chocolate.  Mine was peanut butter and jelly chocolate.  I think I still have some mango in my spleen since it wouldn't fit anywhere else.  We picked up Cher (who waved away her piece of chocolate, a huge glob of chocolate covered peanut butter).  Of course, eventually she caved in and the glorious chocolate was consumed.

After eating enough food and chocolate to feed a small army, we headed to the hotel where we were forced to take naps in order to prepare for dinner and the evening's festivities.

After a fitful two hour nap I still wasn't that hungry, but I was able to force myself to eat since we were going to a place called Railhead BBQ (http://www.railheadonline.com/ ).   This place was a little dirty but the food was  really, really good.  When I say dirty, I mean the place needed someone to actually walk around and pick up the mass amount of napkins and straw covers that littered the floor.  They needed to wipe down a table or two and the bathroom had toilet paper instead of paper towels for you to dry your hands on (but perhaps that's how they tell who washed their hands..those who walk out with bits of TP stuck to their hands and faces).  Still, I'd go back in a heartbeat. I mean, you can't get this food in Oregon!  (By now you've probably gotten the idea that I like BBQ??)

From Railhead we went to...wait for it...Billy Bob's.  Now, I'm not much for Texas nightlife (or any nightlife that doesn't involve a couch and Trout snoring at my feet) but Cher and Sonny thought it would be cool for me to experience a honky tonk in Texas.  So, they procured some tickets to Billy Bob's Texas, THE LARGEST HONKY TONK IN THE WORLD! (http://www.billybobstexas.com/).  You know how some people say they're the largest, or the best, or the biggest, or the hottest, well, Billy Bob isn't a liar.  It was like walking into a freaking small town.  There were so many bars, pool tables, live bull riding, and a concert area.  It can accomodate 5,000 of your favorite cowboys and cowgirls...which to me means it will hold me, Cher, Sonny, and 4,997 strangers whom I don't care to meet.   We didn't eat while there (I know, shocking!) but we did get tickets to see David Allan Coe perform.  He's an oldie but a goodie and I like to think I was able to watch one of his last concerts (mainly because I'm a firm believer that if someone needs to be helped to his chair and then mumbles his way through a concert, he should retire).  But, I enjoyed Mr. Coe's songs and am still devoted to him enough to want to submit his lyrics to my boss when the time comes  (Take This Job and Shove It as written by Coe and sung by Johnny Paycheck in 1978)  (Oh, and take note, I was a little kid then...way little....tiny...almost not even born...)

The next morning I hung out in the hotel (no, I wasn't turning tricks) while Sonny and Cher went back to Dallas.  I was an angel and ate a tiny zuchinni muffin and had a glass of milk for breakfast. Truth be told I was too lazy to go get something better and I was saving room for lunch.  Which, as it turned out, was a good idea.  We stopped at the Yucatan Taco Stand on the way back to Lubbock.  YUM.  (Sorry, I started eating before taking the photo, oops, got a little worried my expanding stomach couldn't go a full four hours without food.)   After Yucatan I was glad for the five hour car ride back to Lubbock...it gave my belly time to stop screaming.  I mean, I haven't eaten so much food in such a short period of time since, I dunno, maybe two weeks ago.  I need to learn to pace myself.

Back in Lubbock we were all pretty tired and still full, so instead of going out we stopped and got some pizza to bring home.  We ate pizza like there was no tomorrow (and at this rate of food consumption there were serious concerns) and Sonny and I watched "The Jerk" and laughed our arses off while Cher walked around and made faces as if Sonny and I were 12 years old.  Pointing out that "The Jerk" is a classic didn't seem to add any good light to the flic.  Hmm...weird.

The next day was Monday and Sonny and Cher (both respectable with jobs and everything) had to go to work.  I took the opportunity to lay around, read a book, do some laundry (which had to be hung on the line...outside...in the 105 degree heat...so by the time I got a load up I was ready to relax while the sweat poured into my eyes and my brain came back down to room temperature, which was near 97).  I met Cher for lunch and had one of the biggest, thickest burgers ever.  I did errands after lunch, riding around on my moto (sans jacket and pants..I mean, I had shorts on but no protective layers) because it was so hot outside I thought I'd keel over at a stop light.   Back at the house, sunburnt from the mere ten minutes of ride time, I decided it was safest if I just kicked back on the couch with my Kindle for the rest of the day.  I mean, I wouldn't want to burn any unnecessary calories.  It takes a lot to keep this round figure.

That night we all trekked over to Rudy's BBQ (http://www.rudys.com/) for my farewell meal.  Rudy's BBQ, to me, is the holy grail of BBQ.  I don't care what you say,  I will never love anything as much as I love Rudy's.  (I'll probably have to marry someone named Rudy just so he doesn't get jealous.)   Rudy's is actually a "country store" and has gas pumps out front and a small store inside where amongst some of the best rubs, spices you can find are basic supplies...like antifreeze.  Don't let the store fool ya.  Rudy's is primo numero uno in BBQ.  I actually order the stuff and have it shipped to Oregon.  A steak, potatoes, ribs, chicken (whatever you fancy) isn't complete without a dash of Rudy's Rub.  Come over sometime, I'll prove it to ya'll. 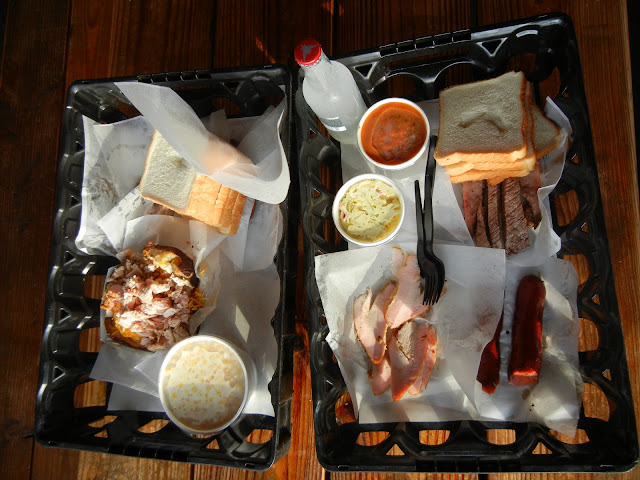 The problem with Rudy's is I never know what to get.  It's all good.  Creamed corn, smoked turkey, jalapeno sausage (to put spice in my life, the server said), brisket, potato salad, baked beans, a smoked potato (lathered in meat, cheese and butter), and sliced white bread.  So we all over-indulged yet again.  It was worth it.   We rolled back to Casa Taylor and sat around talking and playing with the dog, Roxie.

Special thanks to Sonny, Cher, and Roxie for making my Texas stay wonderfully fattening and fulfilling.  I can't wait for mid September when I head to Austin (I'm flying and shall do so shame free since my arse will still be numb).