The Owl Motel's bed was about as comfortable as sleeping on a piece of plywood.  I tossed and turned all night and woke up about ten times.  Once I awoke to find myself scratching a hole in my arm.  Worried about bugs, I had to turn on the lights and inspect the sheets and surrounding area.  (Paranoid much?)  I chowed on a granola bar and hit the road around 8:00 am, heading to Austin, NV.

Highway 305 to Austin is BORING (notice the capitals).  The best thing about the road is it finally ended.  Austin itself is a tiny town with two small cafe's where the food is adequate but expensive.  Eggs, ham, and potatoes for $9.00.  WOW.   From Austin I rode south along Highway 376 for 107 miles to Tonopah which was another 100 miles of straight but sparsly populated asphalt.  I'd guess in the almost 200 miles of riding I saw about 30 cars total.  Most of the time it was me and the road...add some curves and you'd have a terrific moto ride.

The entertainment started in Tonopah, where I stopped at the Shell station to fuel up after heading toward Warm Springs and seeing a sign indicating "NEXT GAS 163 MILES."  To risk the ride or not?  I decided not, given my stellar track record on all things moto. While attempting to fuel up (I had to move twice to get a pump that worked), a guy pulled up on a 1200 GS (I call him Ely since that's where his next stop was).  He was friendly and we shared about a half hour conversation about bikes, Pelican bags and routes over candybars and soda. Having learned my lesson about falling in love at first sight (think Lakeview, OR), I played it cool.  He was on his way to Salt Lake City and was looking for dirt roads to take into Ely (NV) and I was on my way the opposite direction.  He had sold his Harley to buy the 1200GS (which quickly earned him bonus points in my book) and was from Los Angeles (which quickly removed said bonus points).

As we stood talking near the bathroom (romantic, no?)  an older dude pulled up on his moto.  He started talking to us, assuming we were together (we must have made an adorable couple).  Eventually the older dude informed us about how dangerous the road ahead was, that gas was scarce and people got stranded all the time.  He then proceeded to give us both advice which apparently is necessary from everyone at every stop.

When "older dude" left I asked Ely if the dude was trying to scare us.  Ely said he was trying to play it cool since he didn't want the guy to know I was alone.  You know, "it's dangerous for a women to be riding alone."  I told Ely not to worry because I had a gun.  Ely's response:  "Good, you should.  A gun is a great equalizer."  I shall remember Ely whenever I hear the word  "equalizer."  (Who says that???) 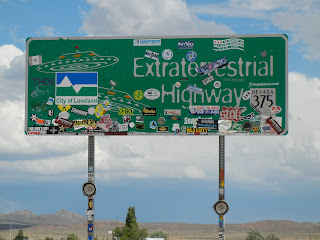 Fueled up and ready to go I put the rubber to the road and headed east on US-6 toward Warm Springs. Warm Springs used to be a town.  Now it's a few trashed buildings and a fence.  From there the excitement built as I turned onto State Route 375, the famed "Extraterrestrial Highway."   The ET Highway is 98 miles of, wait for it, BORING.  But, I probably saw ten cars the entire time so it was clear sailing...err...riding.  And, if I still owned the 1200 GS, I could have been going 90 mph, hauling along like it was nothing.  Instead, I was on Runkle, and well, it felt like I was standing still.  (Seriously, I've been passed by semi's.  How humiliating.)

The only stop along the ET Highway is the town of Rachael, which has a cafe and that's about it.  But, since this highway is close to Area 51 and UFO sightings are high, I expected to see a little action of the science fiction kind.  With three slight movements away from "straight" the ET Highway is not going to make you feel all warm and fuzzy while on your moto.  In fact, it is mostly flat and the only real entertainment you'll get you can see in the photos on this blog (I saved you the trip, thank me later).

Oh, but wait, you don't want to miss this one, either (now you can thank me): 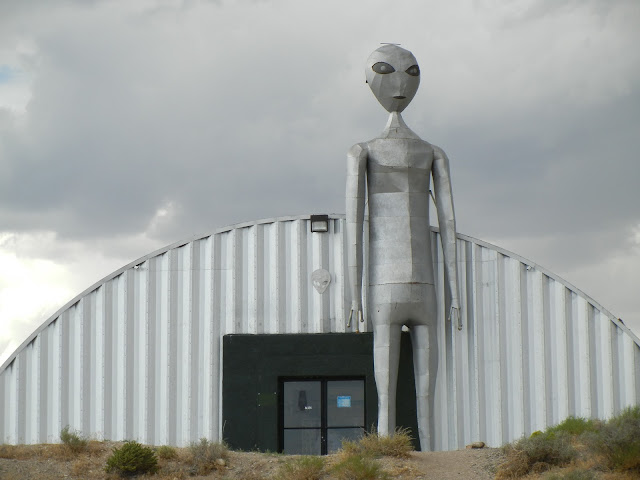 From my disappointing tour of the ET Highway, I set my sights on Caliente, NV for a night of camping at Young's RV Park on recommendations from Jerry.  I outran the rain and only felt about 20 pelts on my face shield (moto mojo gold!).  Young's RV park was clean and inexpensive ($15.00 for a tent sight).  It would have been awesome had my bad moto mojo not have followed me from Oregon.  My first mistake was setting my tent under a small apple tree.  The apples were only about the sizes of plums and clearly not ready...so I thought, "let's get some shade."  What I did not ponder was the wind which would blow the apples off the tree and onto my tent at various times (all coincidentally after dark) and scare the crap out of me (repeatedly).  Then there was the deer who snuck into the RV park numerous times during the night to eat the apples.  I was awakened numerous times to the sounds of "crunch crunch" when the deer were close enough for me to almost touch them.   Still, I slept better than I had the night before in the motel.  Upon packing to leave I noticed I'd parked near a main thoroughfare for sugar ants, which were crawling all over my bike the next morning.  Some of them have been relocated to Arizona (hope that helps their tourism).

Despite my moto mojo, Caliente is thus far my favorite place.  The RV park lady told me I'd best get to the store for supplies since it closed soon.  I hopped on my bike and rushed through town (maybe a two minute ride given the speed limit) and bought some overpriced water and some potato salad for dinner.  When I walked out a woman was checking out my bike.  She looked at me and noted I was riding the bike.  She was very excited about this and proceeded to tell me her name was Susan and she owned the shop next to us.  The Spare Tire in Caliente, NV sells motorcycle &ATV parts and riding gear and, according to her business card, is right off US Highway 93.  Susan welcomed me to Caliente with a quick tour of her shop (even though it was closed) and then a tour of her apartment behind the shop.  She  told me all about her ex-boyfriend (member of a motorcycle gang, whose name I shall keep in confidence since frankly, I don't want to be killed), and gave me her phone number just in case I have any issues on my way to Texas (although I don't know what it really costs to be saved by a motorcycle gang, probably more than I'd want to expend).    Susan is a retired school teacher who is all of about 5'2" and is peppy and fun.  She has enough energy to probably start her own daycare and juggle at the same time.

Susan walked me to my bike and introduced me to three of the town folk who were going to the store.  She also told me about a date she had that night with a guy who worked for Union Pacific, which worked out great since he wasn't from town.   Turns out I was camped next to this Union Pacific guy, although he didn't talk to me that night but instead when I was on my way out of town when we were both at the gas station.  Talk about a small world (town?).   Look her up if you are ever in Caliente.  Seriously, I think you'll like her, too!