Planned on a great night's sleep (aw...the best laid plans)...  I didn't plan on being the biggest yellow bellied chicken in the south.  The campground at Valley of Fire was deserted except for the camp hosts and myself.  You'd think that would be a good thing.  However, it was there that my paranoia hit an all time high amidst the glorious scenery and secluded hilltop.  I pulled my tent under the metal building that housed the metal picnic table perching it between the metal posts of the outbuilding.  I parked my moto in front of the table, thinking that would block some of the wind since I was literally on top of the bluff with a 360 degree view of all the mountains.  As dark approached I questioned my reasoning of camping in a spot with no gravel (since I wouldn't hear footsteps approaching) and be forewarned of any unwanted guests (since we ALL know there are serial killers running rampant).  Then, as the wind picked up and the flaps of my tent smacked the picnic table making me feel like I was in a wind tunnel, I sat upright and still, thinking I could hear creatures scurrying outside my tent.  It wasn't until I thought I heard the zipper being pulled that I finally laid down and rolled into a little ball covering my head with my moto jacket, thinking at least I wouldn't have to SEE the boogey man coming for me.  I started to question if I should shoot first, through the tent (and possibly ruin my new tent) or if I should actually wait until I saw the white of my would-be killer's eyes (or red, if it were an alien).  I uncurled myself and finally slept until I had to get up to pee.  What a pain in the ass that was.  I sat up, my bladder about to burst from waiting so long, and put an ear to the side of the tent.  When I didn't hear anything I grabbed my headlamp and weapon (aka stick left over from a Starbuck's cake pop) and slowly undid the zipper of the tent and peered out into the darkness.  By chance I looked up and saw the beautiful sky and thought surely the devil would be sleeping.  Now, as if worrying about animals and crazy psychotic men isn't bad enough, I realized there would be creepy crawly bugs and snakes just laying in wait for me on the asphalt.  I had to turn on my headlamp and scan the ground in front of me to ensure it was safe since I was barefoot.  Then I started thinking that if the crazies (besides me) weren't asleep and were just waiting for signs of life, I'd surely just given them a precise location via my headlamp on where to come to kill me.  I did my business and dashed back inside the tent faster than Trout eats rotisserie chicken.

I thought I should have camped closer to the hosts, then I started to wonder if maybe THEY weren't the serial killers.  I was not safe anywhere.  Back in the tent I looked at the stars through my tent window and then thought, why can't they make a material that we can see out of but no one can see in to?  Wouldn't camping be so much more fun?  I could see the danger coming from far away!  As I looked up to the sky I noticed the lightening had started in the distance again...and ya'll should remember at this point I'm in my tent under a metal building near a metal picnic table near a moto on top of a hill?  Yeah.  Great stuff.  I finally feel asleep after exhaustion hit and my eyes were so heavy I could fear no more.  Of course, before I did, there was a brief moment where I wondered if the animals would come and eat from the garbage can right next to my tent, maybe a grizzly?  He could grab the rotten bread then realize there was some chunky meat in the tent...

Once daylight blessed me and I thanked the Heavens I made it through the night, I unzipped the flap on the tent to look upon all the glory that is nature and quickly fell back asleep.  Around 8 I woke up again and started clearing my camp and stowing my gear.  It was then that the camp host came riding along in his four wheeler.  His first question was, "Can I ask why you didn't camp down on the grass where it's comfortable?"  Not wanting to sound paranoid (since the real reason was because it was down in the gully and my screams wouldn't travel) I said, "The view!"   He and I spoke for probably a half an hour about the campground, my yellow belly behavior the night before, and where the best food was in Roswell.  As I was ready to roll the rains were upon me again.  Someone hates me but the camp host thinks I'm the funniest "biker" he's ever met. (I've never considered myself a "biker" and frankly, it doesn't sit well.  I mean, aren't biker's tough and macho and not afraid of the wind while camping???) 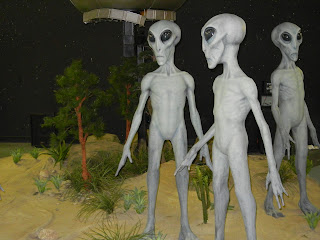 On suggestion from the camp host (Earl), I headed for breakfast in Roswell to the Cowboy Cafe.  Earl had told me the weather would be HOT once I got about twenty miles down the road but I resisted my cooling vest since that had worked so well previously (so well in calling the rains, that is).  I passed Lincoln (home of outlaw Billy the Kid) where they were having a festival in his honor, but it was too early for the bbq to be done so I pressed on.   About two hours later I rode into Roswell, NM.  I was happy to be there and excited to see the UFO Museum, since Roswell is so famous. (And I'd ridden the ET highway so i sensed a theme.) I stopped at the Museum and paid my $5.00 entrance fee.  Inside were mostly written documents hanging on the wall relating to the famous sighting and other abductions and the like.  You can really just get all this information from the internet and save yourself the sweaty, 105 degree ride into town.  But, if you happen to be in Roswell, the UFO Museum seems like the tourist place to visit, so just go with it. 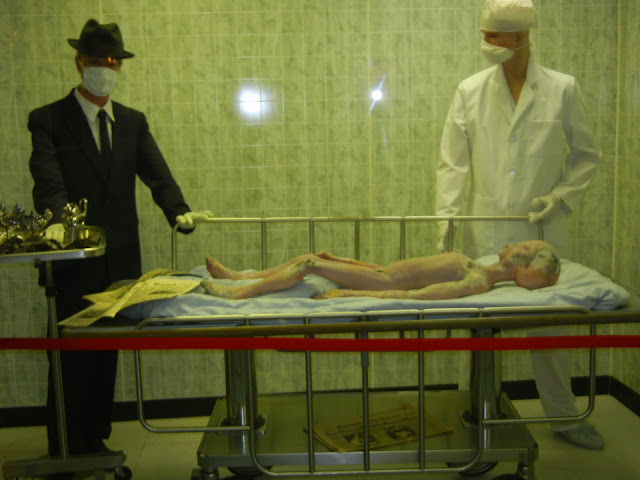 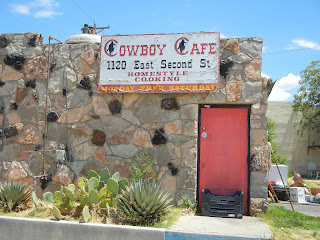 I lunched at the Cowboy Cafe which is at the east end of town (another MUST stop, locals only hangout!) As I was getting ready to go inside I knew I'd found the best possible food place when a cowboy walked by and said, "Ya'll best get inside and cool yerself down!"  The place was tiny and packed wall to wall with cowboy hats and wranglers.  The waitress asked if I didn't mind sitting with someone else and despite the fact that I'm normally not that social, I told her I didn't mind if they didn't mind.  I ended up sitting with a couple (I'll call them the Roswell's) who lived about 15 miles outside of town who were some of the nicest people I've ever met.  We talked about my journey, their kids, their ranch and the famous Roswell UFO Festival.  As I suspected, the locals tend to stay away from the main stretch in town when the festival occurs, July 1-4, and my hosts claimed they were sick and tired of the whole UFO thing.   Turns out Mr. Roswell was a retired trucker so he was able to give me great advice on what to see and do on my way home.  Oh, and just so you know, I ate the battered catfish with fries, home made slaw and hush puppies.  My belly misses the Cowboy Cafe.  It was a fantastic experience (food and the company).  On my way home I'm tempted to go back the way I came, just to pass through Roswell and hit the Cowboy Cafe again!

After lunch I hit the road and quickly felt the heat from the bike searing through my Aerostitch AD-1 pants.  I kept going, on and on, until Lubbock boomed in front of me like a mirage.  You can't imagine the feeling of relief when I pulled into town and then stopped in front of Sonny and Cher Taylor's house, which was my destination (Not their real names, but a close resemblance, see photo.)

After six days of straight and twisty roads, hills, mountains, dry plains, green brush and dead grass, cows, alien sightings, limited traffic, and countless hours of moving back and forth on the seat, attempting to find comfort where there was none, I was there.   I was happy I'd made it...but I'd be lying if I told you I wasn't wondering how much it would cost to ship the bike back to Oregon and fly! 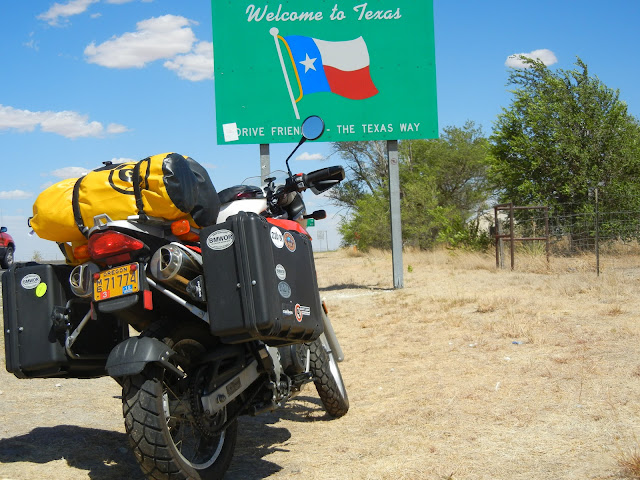