Woke up in Caliente around 5:30 am.  Did I mention there was a train track right next to the RV Park?  Well, there is and it's a lovely alarm clock.  I decided I may as well get up and get moving and try to beat the heat.  After a quick shower (moto mojo black, forgot a towel) and a rather extensive pat dry with brown paper napkins, I stepped out of the shower room and almost walked into the maintenance man.  I don't know who was more scared (he was frightened since I had on short shorts, my apologies to his eye doctor).   He said I'd best be moving along since a storm was coming so I rushed to drop the tent and pack my belongings.  As I flicked as many ants away as I could (off the bike) the first drops of rain started pounding down around me.  I wasn't sure exactly where I was going but I took off anyway and rode Hwy 93 to 319 (turns into 56) toward St. George, UT.

These roads were a little better for moto enthusiasts, as they curved and turned, much to my relief.  I stopped in St. George to grab stuff to make a ham and cheese sandwich and marveled at how I was making good time.  To my dismay I realized I'd lost an hour on the ride due to time zones and now it was more like lunch time rather than breakfast.  Drat!   Oh, and somehow from the time I walked into the store and walked out someone lit a fire because it was fricking HOT outside.  I went back in and filled my Camelback with ICE and hit the road, now feeling behind schedule and sweating like a school boy in a Catholic Church (my bad, sorry). 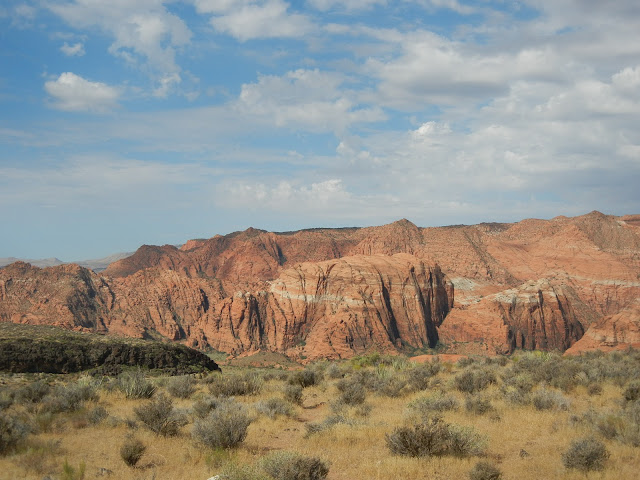 In St. George I decided to take my time today and see the sights.  To this point, Utah had the best scenery and my moto mojo was doing great.  I'd outran the storm in the morning and rode parellel another, feeling the love from the moto Gods!

I rode into Zion and paid my $12.00 to experience 22 miles of park while attempting to reach Highway 89.  Zion is well worth the money.   What I could have lived without was everyone else who was there.  I spent the entire 22 miles following RV's that seemed intent on driving the speed limit (25mph) so the only good curves and twists and switchbacks I'd experienced on my trip thus far were wasted!  (Doh!  Moto mojo black!)  I loved (LOVED) Zion.  It is remarkable and to call it simply "beautiful" is an understatement.

I didn't dilly dally in Zion as  I was ready to hit Route 89 which runs from Canada to the Mexican border (in two sections).  I read about this route previously in National Geographic's Adventure Magazine, which said Route 89 was a MUST take route.  And, well, I did it.  And guess what?  I'd go back and ride the boring ET Highway ten times rather than take Route 89 ever again.   Traffic was heavy in both directions and the speed limit of 65 is most assuredly a "suggestion" since even semi's were passing me.  (Don't even get me started on the road construction.)  I wasn't so lucky to outrun the rain this time and unfortunately, about 50 miles before the rain caught me I was so hot I decided to give my cold vest a try.  So when it started raining and the wind started blowing I was wearing a vest packed in water.  (Moto mojo?  Off the charts B.A.D.) 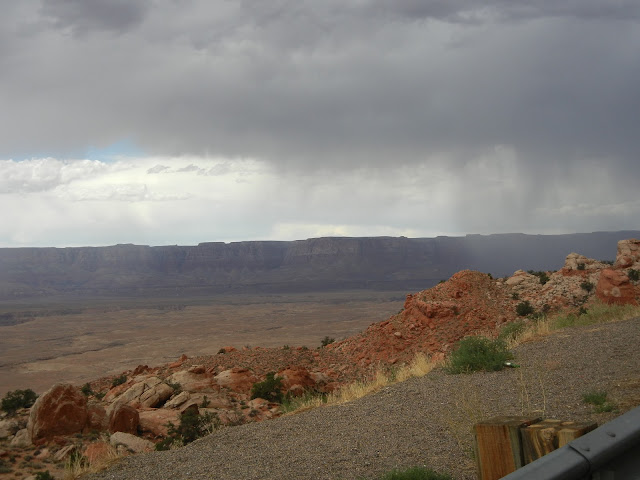 I spent the next 100 miles or so shaking off the cold only to be trapped in another storm right after warming up.  I got to Flagstaff, AZ and was finally warming up enough to get gas and ponder moving on another few miles.  I hit Interstate 17 out of pure desperation to get moving quickly and get this day over with.  I ended up here, in Camp Verde at the Motel 6, counting my lucky stars I'd gotten inside before the torrential downpour, lightening and winds picked up again.

Today, not one Subway or Shell dude was there to light my way.  I think perhaps I'd already had enough chances in the love department (and failed! Doh!).  No more free lunches.  I did, however, meet a lovely man from Georgia at the hotel.  He saw the bike and looked at me and looked at the bike and then looked at me and shook his head and then said, "I can't believe you're riding that! All by yourself?"  He was amazed that a woman would get on a bike (first amazement) and go that far (second amazement) and that I wasn't gay (third amazement). Wow.  He was very nice and even saw fit to share some of his wisdom with me.  His name was LT (maybe it was, maybe it wasn't), and he said he thought I should ride as much as I wanted (err, thanks) because our lives are our own books.

As LT explained, each day is a new page and what we put on those pages (or don't put on those pages) is up to each of us individually.   Some of us have big, thick books that are full of fun and excitement and some of us have small, thin books that are closed too soon.  The only constant is the beginning and ending of each book.  We are all born and we all die.  How you choose to fill your book is up to you. If you listen to those who say you can't, and you don't, then it is only your book that suffers.

I was digging LT.  Right up until the moment he asked me to have a drink with him.  I mean, we'd already discussed the entire meaning of life.  What more was there to say???


Tomorrow I head toward Roswell, NM and then my destination of Lubbock, TX.  Today was a good day.  I was screaming into my helmet that I would not quit when the winds threatened to push me over and my head was bobbing like a pogo stick.  When I was shivering in my cold vest with the rain water smashing against me like a sledge hammer,  I was smiling, thinking how lucky I was to live in Oregon where the weather teaches us how to tolerate such things.  Tomorrow will be a new page in my book.  I hope I write it well.