I stopped in Torrey, UT out of pure desperation (I'm tired!).  I've been on the road for about 12 hours, although probably only on the bike for about 10.5 after my many stops for photo ops and to buy a cowboy hat for a friend.  Skipped lunch today since I kept waiting for something to peak my interest...apparently after gorging myself this last weekend in Texas a burrito from the gas station was sufficient.  I'm at the Days Inn which was about 90 buckaroos for the night (a discounted price and the last room left).  I passed up camping despite the good views because I'm a chicken but also because I had no water.  I filled up my camelback in Albuquerque and sucked it dry about 100 miles ago.  Moto mojo is turning black again.

My mojo was bad starting this morning at the hotel when I went down for breakfast around 6 am only to find a couple empty nesters hogging the waffle maker.  I mean, really, do you need to stuff five waffles in your face while people are waiting?  And guess what?  Only white bread.  Who eats white bread anymore?  I ate a half a bowl of raisin bran and hit the road, ready to swear off hotels and free breakfast. (I like how I'm disgruntled about a free service. I'm such an ungrateful Dork.) 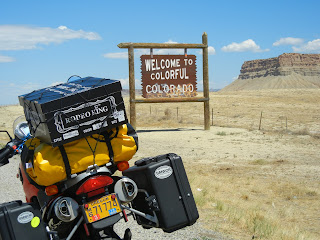 From Albuquerque, NM I stayed on Interstate 40 to Gallup which was about 120 miles of traffic and annoying drivers.  I had decided to keep to Interstates when I set off this morning then after about ten minutes actually on the Interstate I decided back roads, despite the fact that they take longer, would be more appealing.  In Gallup I bought a cowboy hat and then lost my bike keys.  (It's scary that I just KNEW that would happen at least once on the trip so I had a spare.)  I ended up finding them after about 15 minutes of searching.  I then went to the post office to mail the hat.  They wanted my first born child and my dog for shipping costs.  I thought the dog was excessive so I ended up strapping the hat to the back of the bike.  I look totally cool now.  (It's going to be THE thing to do in a few months, you mark my words.)

Road construction plagued my route (491 N to Shiprock) and made for delays about every fifty miles.  Of course, once I got going I was stuck behind a line of cars and missing some good curves.  From Shiprock I went into Colorado then backtracked on Highway 60 to ensure I hit Four Corners, where Colorado, Arizona, New Mexico and Utah all meet at the, duh, corners.  I thought it would be cool to say I was in all the places at once.  In reality it was just an extra 30 minutes out of my way.  But gee, I can mark that off my bucket list now.  (And that's what life is all about, right?)


From Four Corners I took a small route (41, which turns into 62) which was actually quite nice.  Lots of turns and twists.  I ended up near Blanding, UT and veered onto Highway 95 toward Natural Bridges National Monument and Glen Canyon National Recreation Area. 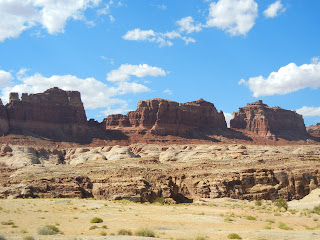 I'm going to share a secret with ya'll.  The Glen Canyon area is the prettiest, most spectacular thing I've seen thus far (and it feels like I've been to hell and back).  I found myself at a loss for words after using my quota of "holy shit" and "wow".  I eventually reasoned with myself that if there ever was such a thing as "God's Country,"  Utah would be it.  The sheer cliffs and columns were borne to perfection by the wind and rain.  The colors were spectacular and varied,  the views breathtaking.  In sections it was as if someone had built a Lego mound and pushed it down. The rock was flat and square.   There were big pieces and little pieces.  Other areas had round rocks that made me think of giant chocolate marsh mellows (I have a food fascination).   It was amazing.  Simply amazing.  Other locations appeared like chocolate frosting, whipped smooth and fine.   I imagined the smooth parts were giant's bellies and if I looked closely enough I would occasionally see faces or hands built into the rock. (Of course that could be in part to my overactive imagination.)  Ya'll can have Zion (which I thought was remarkable) and Moab and all the others.  I'll take Glen Canyon.

I do not kid when I say just when you thought it couldn't get any better, it did.  I think the most mind blowing thing was all that beauty and the dryness then turning the corner and seeing the Colorado River flowing through it.  I hope one day you all get to view such a place.

After riding to the edge of the Glen Canyon area I was in no rush to move quickly.  I wanted the memories to last and twisting the throttle seemed like pushing them away.  Finally I sucked it up and moved along...toward Capital Reef National Park.  Oh, and trust me when I tell you that this is also one stretch of road you do not want to miss.  It was curvy and twisty and most assuredly helped to make this day of riding the best one yet.

I'm hoping to be in Bend/LaPine, OR by Friday and frankly I'm getting frustrated that I've traveled so far and don't seem any closer to the end.  Today's beauty make up for it but still I'm ready for my bed and to see my Trout again.  I'm debating on heading straight for Twin Falls, ID (430 miles on the interstate) or monkeying around with different, smaller roads which will increase my miles and time.  I guess I've nothing but time.  And after all, this is God's Country, remember?