From Camp Verde I hit the pavement going east on AZ-260 toward Show Low.  This section of road led me through the Apache-Sitgreaves National Forest and the White Mountains.  I must admit my earlier disappointment with Arizona waned and by the time I'd ridden a mere 50 miles I thought to myself, "This part of Arizona does NOT suck!"   AZ-260 (which later becomes 60) is perhaps the best part of Arizona I've seen and is a fantastic motorcycle road.  The flat, straight roads of the previous day were replaced with curves and lush greenery (and trust me, I don't think of lush greenery when I think of Arizona) that seemed to go on and on. 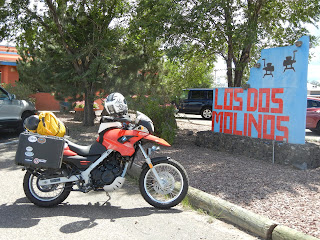 I stopped for lunch in Springerville and for the first time in the trip I actually took the time to eat in a local watering hole.  If you are ever in Springerville stop at Los Dos Molinos (the two grinders) http://www.losdosmolinosaz.net/ at the east side of town (trust me, you can't miss it, it's one of the few places to stop).  The restaurant has been around since the last 1970's and serves only fresh ingredients.  Their slogan is "Some like it hot."  And trust me, it's HOT.  They serve two kinds of salsa with their chips and place a pitcher of ice water on the table at the same time.  It's needed.  The first thing I thought when I tasted the red salsa was "HOLY HELL!"  I could feel my face redden and little  tears forming in my eyes.  It wasn't pretty.  The waitress, J, was very friendly and suggested the pork burrito with a side of beans.  The beans aren't refried as "if they are done right the first time you don't have to refry them!" I have to admit I had to get a side of sour cream after testing a few bites to help "cool" the fire on my tongue.  The pork was huge chunks of perfectly seasoned goodness and the beans, well, the beans were the best I've ever tasted.  Amazing.  They have locales in Phoenix and Mesa.  If you pass this place up you will never forgive yourself.


After lunch the roads got flat and straight again but the view was fantastic while the sun was shinning. 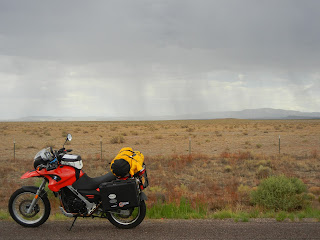 I meandered over to Highway 380 toward Roswell, NM where I wanted to stay the night.  The heat had not been an issue but in Camp Verde I'd donned my cooling vest just in case.  It was probably due to my vest that I hit storms again.  This time, the storms were not beside me, but directly in front of me and appeared to go on and on.  I had the presence of mind (and enough experience with my bad moto mojo) to remove the cooling vest and put the rainproof liner in my vented jacket before riding into the darkness ahead.  After about half a mile my leather gloves were soaked through and I'd ridden through some weather that would even disappoint a fish.  The rains, thunder, lightening, and blackness continued for miles off and on.  When the wind arrived I almost laughed out loud.  My luck sucks!

As I continued toward Roswell the rains let up and I decided I'd stop in Carrizozo, NM instead of Roswell since I had plenty of time.  I passed the Valley of Fires Recreation area and was blessed with a view that made my mouth drop open like I was being spoon fed chocolate.  I rode about two miles past the camp ground and decided life was too short to wake up in a cheap motel when I could wake up surrounded by mountains in the distance and lava flows.  I turned around and headed back to the campground.

Camping was $7.00 and the facilities were clean and well maintained.  It was, in fact, better than the RV park I'd stayed at previously.  I could almost live in the bathroom.  Showers were free!  The view was breathtaking and included a nature trail through the lava flows.  I hunkered down and planned on a great night's sleep.