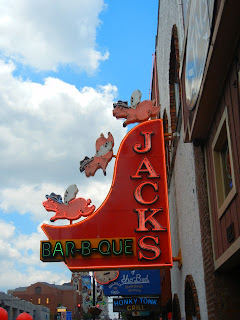 Late start today.  Waited for Hertz rental car to pick us up, which happened around 11 am.  We hit downtown, parked the car and walked to Broadway where the parade was in progress.  Based on David's recommendation, while the line was short at Jacks Bar-B-Que, we snuck inside and took a window seat.  We watched the parade while eating some of the most fabulous pork ribs I've ever had.  No joke.  The BEST.  Skylar thought the smoked turkey was "good" but she also preferred the ribs.  At Jacks you get to choose your meats and veggies (and shockingly, Mac and Cheese and spiced apples are both vegetables) and can get three meats and two veggies for around $13.  If you are ever in Nashville, and you happen to LOVE ribs, stop by.  You won't regret it.   Time it right, though, since the lines are usually out the door according to our buddy, David.  (And, YES, they were out the door and down the front of the building today!)


We bumped into a couple from Portland we chatted with at the airport and then later drank with three funny ladies (Eulonia, Pat and Donna) we'd met the day before in line for lanyards.   We all hung out in Toostie's World Famous Orchid Lounge.  Eulonia is from Savannah Georgia and a real hoot!  Since I could be unemployed by the time I get back she offered me a job working at a business that she thinks will take off.  I hope I get to be the manager, as her idea is to have older women as prostitutes so old men can actually have sex with people that remind them of their wives but who actually like it.  I'm hoping before I take up prostitution I'll have a few other options but Eulonia is one entertaining gal! The music was great and the atomosphere fun.  Another piece of music history...where some very famous people have blessed the same tables we passed.  Skylar was practically jumping out of her seat.

From Tootsies we it the streets to check out some stores and to mingle with the thousands of other country music fans.

Nosebleed seats at the CMT Awards tonight.  No, really, we were two from the very top.  Going to an awards show sounds fun and exciting.  And it was.  Except for the commercial breaks.  And the announcer screaming at people to keep the isles clear.  I'd rather watch it on TV in my easy chair with a stiff drink.  But, what was more than exciting was being able to watch the country singers interact.

So they all sit in this huge roped off area with ramps going down to the stage.  Since we were directly across (and about a mile away) we had a great view of the happenings.  I must first tell you, I really like Arnold (which is his real name but he doesn't use it onstage).  His songs make me want to grab a chair and a margarita and hit the beach...forever.  He's great.  If he were about ten inches taller, had hair, and didn't appear to be a jerk, I'd be so into him.  See, here's the thing...Carrie Underwood, Jason Aldean, Charles Kelly (from Lady A), Luke Bryan and others were all great sports.  They cheered and clapped for everyone and Carrie, Jason and especially Luke, were up and ready to shake hands and hug anyone and everyone who won an award.  Just watching Luke Bryan put a smile on my face.  He is so peppy and friendly they should have given him an award for sportsmanship.

Meanwhile, my man Arnold was talking the whole time to a chick who may or may not have come with him, and was ignoring people when they were singing.  Bummer.  He clapped maybe for about a minute total and did not appear to want to be there.  Of course, this is my impression...and well, darn it all, bless his heart, the others I mentioned seemed like they actually still like music while Arnold just looked like he'd rather be on a beach with a drink.  I guess it's hard to imagine who can blame Arnold.   He didn't win any awards, sang once, and well, the chick he was talking to did have a very revealing dress on...go Arnold go!  Still, it was sad and Skylar said she was never going to buy his music again.  Me, I'm still a fan...but I'm not likely to go out of my way to be in love anymore.   (I'm sure Arnold is really, really sad about that.)

Kellie Pickler's date for the night was a Marine and his dog...so awesome to see her hanging out with him, petting the dog, and generally being an awesome person.