Based on a recommendation from someone we met at the Ryman, Skylar and I headed west to Belle Meade Plantation.  Shockingly, this was only about five miles from our hotel so it was easy to find.  Belle Meade is a cute little suburb of Nashville where some of the largest and nicest homes I've seen in a long time are located.

Part of the Civil War was fought on the front lawn of Belle Meade, with the man of the manor, John Harding, supporting the confederates.   Harding had as many as 40 slave cabins on his property and each cabin held two slave families, regardless of how many people were in each family.  Belle Meade stayed in the family throughout the war but fell on hard times during the depression since their main claim to fame was horse racing and breeding.  What was over 5000 acres of plantation was dwindled down and by 1906 nothing remained.  Belle Meade has an impressive story and you can still see bullet damage on the large stone pillars along the front.  And, most impressive is the Belle Meade winery...where Skylar and I both snagged a few bottles of blackberry wine that taste like heaven.  Hope they all make it home so we can have a  celebration for Father's Day (I'll be celebrating Trout's father and since Trout doesn't have one, it seems like a shame to overlook her mother, no?). 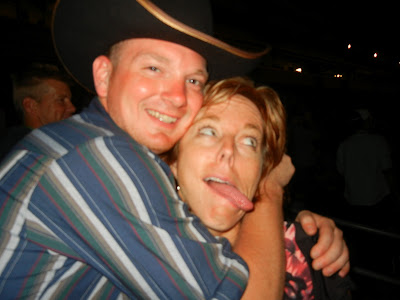 Meanwhile, at LP Field, the night's concerts were great despite the fact that it was our last together with Idaho, Cali, and the New Mexico couple (sitting next to Idaho).  Idaho went all out and drank about nine beers in an hour and proceeded to fall as he was sitting back down.  Skylar was very sensitive about it as she laughed and made fun of him eating seat with his side of crow or vice versa.  (She's hurtful.)

Skylar has an un-natural love affair with Dierks Bentley so she was very very excited to see Dierks and threatened to hurt us if we all didn't stand up and dance.  So we did (She's hurtful and macho).  Luckily for Dierks, his secuirty was in full force and he made it out of the LP theater without being attacked.

Seriously though, Skylar was very sedate compared to when she saw Luke Bryan.  No fanning herself (there wasn't one around) and no throwing her panties at the stage (well, she threw them but they were so big that the wind caught them and after numerous UFO sightings, a gaggle of birds fell to their death..and these were thongs).

As the CMA's came to a close, 69,998 fans and the two of us walked across the bridge toward downtown, listening to the street vendors try to hock their bottled water, dodging cigarette smoke, thinking this was a terrific weekend...and wondering whether it was too early to get tickets for the 2013 CMA's (It's not by the way.  You can get them now!)

CMA Tip #4:  Dress casual.  VERY casual.  Even at Opry and the concerts, although there were a lot of chicks walking around in their summer dresses and boots, there were more people in shorts and flops.   Don't be afraid to be comfortable...and dress down!