Sitting on the stage waiting for Love and Theft to play at the Country Music Hall of Fame stage, Skylar and I started chatting up a young chick who looked harmless.  Her name was Cassie and truth be told, there's a devil under there.  Cassie is apparently Love and Theft's BIGGEST fan and head of the Love and Theft Mob group (whatever that is, it sounds dangerous to me).  She's on a first name basis with the band and threatened to "cut" me if I got too close.  I don't think she was joking.  Cassie had all the makings for a Sharon Stone/rabbit boiling incident.  I pitied poor Love (Stephen) and Theft (Eric).  Shockingly, Cassie knew all the songs and belted them out like she was singing for her supper.  When Eric's cup fell off his chair and started rolling around on stage, Cassie grabbed it up and then hit an all time low when, after the set, she yelled out, "ERIC!  I got your cup!!!  It was rolling around and bothering me so I got it!!!!"  He glanced at her long enough to give a half hearted smile and say thanks (his eyes said something more like, "Stephen, RUN! It's that crazy girl!").  Shockingly, Stephen didn't EVEN LOOK AT HIS BIGGEST FAN once.  I'm sure she's holding onto the dream though, and was actually in line for an autograph after the show.  Go Cassie, Go!  (And Run Stephen, RUN!).

I met a HUGE star today at CMA Fest.  I was so excited and lucky to stumble into the area at just the right moment.   His name is Trout and he is a Chesapeake Bay Retriever who is chocolate brown (as some of you know, my own chocolate dog is a Labrador Retriever and also named Trout, so it made sense that I fell madly in love at first sight!)  The superdog Trout (unlike my couch surfing Trout) was invited to the Purina Ultimate Air Challenge which is a huge honor.  Apparently he's an awesome jumper and narrowly missed being in the top 5 at the competition. 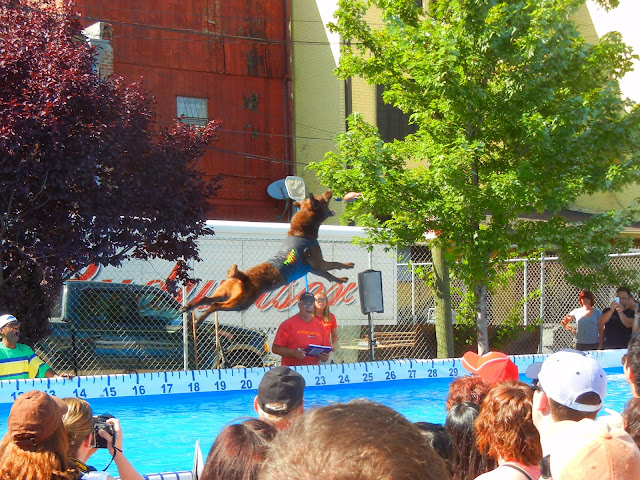 And, to top it off, he's a real sweetheart!  I was going to get a pawagraph but I didn't bring any paper or a pen.  I had to settle for a photo.  I don't know what you think, but I'm pretty sure he's digging me being so close.  What a handsome fellow!!!!  Check out that smile!! I've gotta get my Trout one of those shirts.  I wonder if they come in size Lard.   Check out Ultimate Air Dogs if they ever come to your city and check out Trout at the Purina Finals (this dog has a YouTube video...wow). 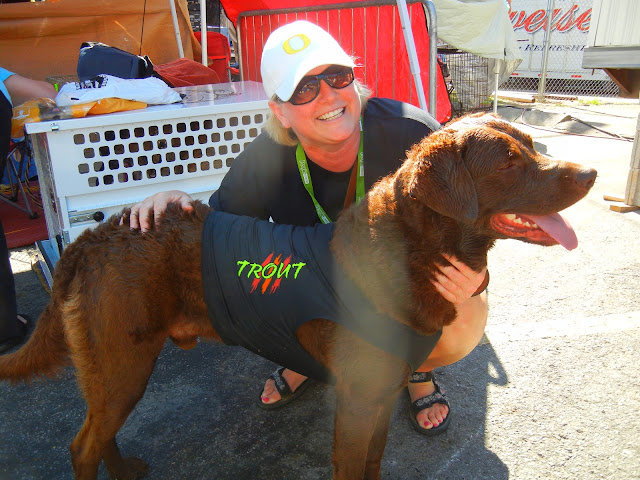 On the way to LP field I spied some motos and marveled at how brave these Tennessee riders are...they leave their helmets on their bikes with over 65,000 people walking around?  Bad Arse!!!


CMA Tip #2:  Hang out at Wildhorse Saloon in the bar.

Skylar and I walked to hell and back (it felt like that anyway) looking for a lunch spot.  Eventually we ended up at the Wildhorse Saloon  for the second day in a row.  We chose Wildhorse since we knew it had a huge seating area...what we didn't know was there as an hour and a half wait (despite all the seating).  We decided to tromp up to the third floor to hang out at the bar while we were waiting to get paged for our meal.  There was hardly anyone up there and about five servers sitting around doing nothing.  The bartender, Samantha, was kind enough to let us order from the bar and gave us a table near the window in the most comfy seats ever.  Skylar and I sat there, drank, ate, and relaxed for about two hours or more while others were standing outside in line waiting for their pagers to buzz.  Samantha was so great...and the food there is top knotch.  We tried the brisket, ribs, wings, and pulled pork today.  YUMMMY.