Today was a flight day.  Not much to report.   My seatmate and I had a terrific conversation that made the entire flight breeze by.  So an almost five hour flight felt like a 45 minute chat in a bar.  Whatever your view of guns, hunting, and or sport killing (animals, not people), I have to admit, I was impressed with my new buddy, Jim.  He's literally a world traveler who has hunted in Zimbabwe, Russia, Scotland, and everywhere else you can imagine.  He shared so many wonderful stories I'm ready to sell everything I have and marry a millionaire so I can travel more.   I won't ramble on and on about my new crush (stop it, I'm joking, he's married!)  but I do have to share that when we parted ways I thanked him for his time and let him know that he had ruined the "cool" factor of my vacation...since guess where Jim was headed?  Seriously, this mild mannered orthodontist was headed to AFRICA on a hunting trip. Whatever.  Sucks for him.  He's probably going to hate every second of it.  Right?   Rigggggghhht.

Ok, so back to my little bucket list vacation.  Upon arrival I quickly realized the Atlanta airport was not a tiny little redneck pit stop but one of the busiest airports in the U.S.   Jenn arrived before me ad made sure I knew that my baggage would be in the domestic area and not international.  I had to reply with a snarky comment, "I know what domestic and international mean, thank you."  So started the back and forth of two stubborn, slightly mental, road trip geeks.

First stop on our trip was BBQ!  (Full disclosure,  I made a deal that for every BBQ place we visited Jenn could earn one stop at a historical site, how generous of me)  Only a few miles from the airport we found Pit Boss BBQ.   It's not much to look at, in fact, it was kind of horrifying from the outside.  The parking lot had a great view of garbage and grease cans. I eased our shiny white rental chariot into the parking spot next to a beat up pick up with a Lazyboy recliner in the back.  I shit you not.   The dude walked out and I took the opportunity to discuss something very important: BBQ.  He said the ribs were great and couldn't suggest any other place to go...so we braved the potential ankle sprains and carefully cruised across the battered pavement to the dirty looking shack in front of us.

All I can say is, don't look down when you enter.   The tile floor needs a good scrub and the mismatched seats don't provide the "small café" feeling as much as a vibe of "unkept" and "unclean."   But, having said that, I still went totally gung ho and ordered a platter of food worthy of a king. 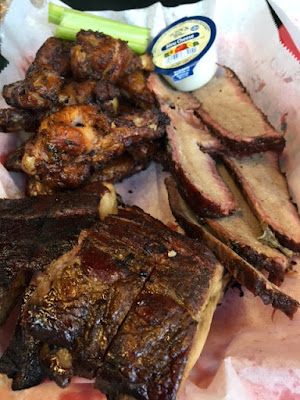 Jenn pointed out it was $30.00 worth of food and I could probably share it.  Buzz kill, right?  Fine. Whatever.  We walked away with an order of ribs, brisket, wings, cornbread, cheezy mashed potatoes, Brunswick stew, and two drinks.  We grabbed some mild sauce and then some hot sauce.  As I waited to fill my cup with ice, I watched a large bug crawling on the wall behind the soda machine.  Not a good sign.

So the food.  Keep in mind, I'm a total BBQ freak ...but I'm also judgmental like a nun at a private school who has just found a game of Cards Against Humanity under someone's bed.

First, Brunswick stew was so spicy Jenn took one bite and pushed it aside.  The brisket was great.  Great flavor, tender, tasty, and downright delicious.  Everything else was ok.  Just ok.   Of note, the spicy homemade BBQ sauce was so spicy that I literally asked if there were flames coming from my mouth. I can take a little heat, but not when it sneaks up you...admit it...you know what I mean. You  know when you take a bite, smile and say, "Oh yeah, that's not that hot" then about a second later your face contorts and as you feel like acid is dripping down your throat?  It was like that. Awesome sauce.  Literally.