Headed to a Gator tour today since Jenn decided she's not a chicken sh*t (for those of you who are not delicate, that word is shit).   The tour was a slow pontoon boat with about 25 people on board.  The captain was an original Cajun who actually lives in the Bayou (or so he said).   The tour was educational but frankly, the last one I took on a 6 man boat was a lot more entertaining to me...and we got a lot closer to and saw more gators.  There was a little chap of about 5' who swam toward our boat, snagged a marsh mellow then swam away.  By chap I mean gator.  That was about the extent of the excitement unless you count about two dozen turtles and a 2' gator that was actually on board in a box.  Everyone took turns holding it but I passed.  I don't play with my food.  Some great photos, though.


After the tour, I stayed at the hotel while Jenn toured the Garden District.  She saw all these things that I was much too lazy to see:  Sandra Bullock's house, Peyton Manning's family home to name a few.  Me, I don't care where Sandra lives, though I wish her the best and if she's reading, please send money.

But, I wasn't a total bore.  I did laundry.  You may think, oh, what a great way to spend your vacation, but I like the people part of vacation (partial lie) so I wanted to see who else was doing laundry while on vacation.  I spent probably 45 minutes talking to a great lady from New York.  She was a Walking Dead fan so we chit chatted about the latest deaths and about how it's much more than a zombie show.  In fact, I just read an interview by some famous dude who writes zombie movies (Mr. What's His Name) and he said the Walking Dead was actually a soap opera with zombies.  Hater.  Are you tired of the Walking Dead?  Write your own blog and you won't have to read this one.

Later, I saw the woman and her entire family in the lobby.  They were dressed up and headed to the French Quarter.  Of course I had to take her photo.
Also, in the lobby of our hotel, we saw a wonderful costume from Alice In Wonderland.  Check this one out.  It was made by the woman's son who apparently sews for drag queens.  Not sure what that means, but somehow the woman thought it warranted pointing out.  Fantastic costume! 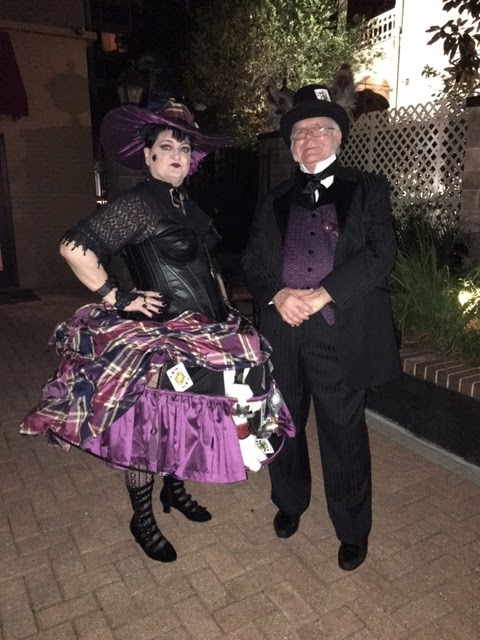 Back in the room, I took a nap and Jenn went into her room.  So halfway between awake and asleep, I have what can only be described as a haunting occur in the room with me.  Someone tried to push me upward while I was lying on the couch.  I shit you not.  Scared the bejebus out of me.  I can only imagine I was not awake and was dreaming, but it was one of those dreams that stick with you and makes you wonder if you really are alone....I told Jenn about it and she said she had some weird dreams the night before about the haunted house behind the hotel.  Great.  Fantastic.

We slipped off to Voodoo BBQ in order to calm my nerves and build my strength.  And that night, you can bet I slept with the EMF reader near my bed.  And with the light on.  Around 5 am I grew a pair and decided to turn the light off.  I got back in bed, got comfy, and the darn EMF reader went off like a fire alarm, beeping and flashing.  Scared the living crap out of me.  Seriously.  It had been on all night without a peep and the second I turn the light off, I get a reading.  After a quick change of diapers, I went back to sleep and didn't have any other issues.