Leaving Myrtles Plantation slightly disappointed for not having seen one ghost, we headed toward some other plantations and New Orleans.  Apparently the plantations think they are worth a lot more than I do.  We drove past a few plantations and Jenn took photos...but didn't tour any. 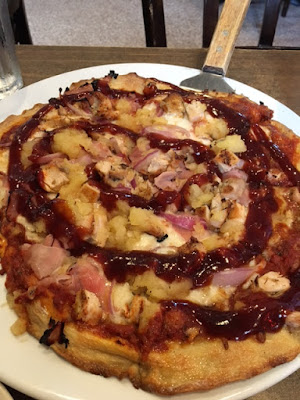 Our first stop was Katie's Restaurant.  This place has a Portland vibe.  And the food, oh the food is worth the stop!  Garlic Feta Fries, Hulu pizza (Canadian bacon, pineapple, chicken, and BBQ sauce) were both fantastic.  Seriously, if you get to New Orleans and you don't stop at Katie's, you are missing a gem.

After trudging through traffic we arrived at the in the Garden District at Avenue Plaza.  (Thank you to Jenn's aunt for allowing us to stay here!)  Avenue Plaza is a large Worldmark resort that is directly on the trolley line with great restaurants within walking distance.

After ditching the rental car (because you don't need a car in New Orleans in the tourist sector and certainly don't want to pay for parking, if you can find it) we made our way to Royal Street for a Killers Tour.

Walking what seemed like miles in the hot, humid, action packed French Quarter was a lot like waking up in Vegas to find you're tied up and have been placed in the trunk of a Ford Fiesta. Not like that's happened, YET, but I can imagine it would suck.   Our tour met in the front of a famous building that houses spells and other freaky stuff I'd rather not mess with.   Yeah, potions and spell ingredients?  No thanks.  Church is starting to sound better and better.

Our tour guide was a festive drama queen named Randy who was very entertaining.  He was very knowledgeable and very, very peppy.  Loved him.  During a pit stop we found out his master plan is to move to New York, work in a gay bar (you know, cause he's gay, which I pretended to be shocked about), and drive an Uber. It was pretty interesting to listen to him. He has such a passion for life.   Just being around him made me want to go to NY and work in a gay bar so I could watch him in action.  I think he's a real heart breaker who does it with flair and a lot of waving of the arms and intense facial expressions.

Back at the hotel I pulled out the sleeper sofa (I'm getting the luxury arrangements) and quickly dozed off.  Jenn, again, was unable to sleep due to the spirits who came to her dreams.  I'm pretty sure she had nightmares about the tour but she's certain it has to do with the haunted house on the property.  All I know for sure is I'm glad I'm not paying the light bill on this place.