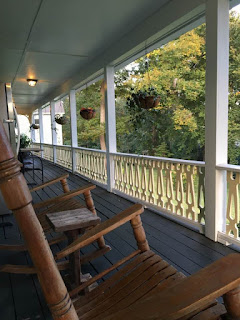 Tonight's accommodations  is bed and breakfast called The Brady Inn.  Not usually my cup of tea since the extent of my historical curiosity ends with what I had for dinner last night.  But Jenn is a real history buff and enjoys making me stop at all these important and interesting places.  Left to my own devices, I'd be at the Best Western right now watching TV and stealing bad coffee while listening to the neighbors grunt and groan.  Then I'd complain about it all day tomorrow for various reasons.

Anyhoo, this Brady Inn is nice and the ceilings are really high.  I'm just wondering about the attic entrance that's near my bed...and how I ended up under it while Jenn is near the door for a fast escape.  Cute rooms, great grounds to walk around, wonderful wrap around porch with rocking chairs and bug spray provided.  Which perhaps isn't a good sign.

We headed off to dinner once Jenn drank her glass of free wine.  We stopped at the Madison Chophouse Grille for dinner.  What I didn't know was that would change my life.  Seriously. 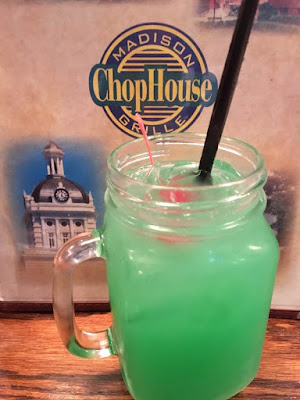 You wanna know why?  Because it was there I discovered A Reason to Live.   Honestly.   I actually discovered two Reasons.  The little babies are mason jars filled with everything you need to have a good time and forget the work week.   Apparently it's the same drink as a Grateful dead made with vodka, but I've never drank that either.  Ingredients include:  vodka, coconut rum, peach schnapps, melon liqueur, sour apple pucker, blue curacao, sweet and sour, orange juice, and pineapple juice. It'll knock your socks off.

Before my first reason to live, we sat down at the bar to eat.  This place was hopping.  There was a convention in town and the bartender, Mary, asked if we were there for it.

For a second there, I thought we were on hidden camera.  Wasn't sure whether to say yes or no.  We look around and made sure everyone had teeth and weren't picking at sores.   Everyone had a good laugh about it.  After my Reason to live, or maybe during, I'm not sure what order things happened after I started sipping that drink....I started talking to the guy next to me.  He WAS with the math convention.  He worked for Carnegie something or other and was a textbook salesman or something.  Clearly my attention span wasn't that great.

Yeah, I wish I had that excuse.  When he left, a 30-something refrigerator repairman sat down.  His name was  Jay.  Between rushing outside to smoke and eating a large steak, Jay and I became fast friends.  Or so I treated him that way when I started asking questions

About here is when I should have shut up and stopped asking questions, but since I already had a reason to live under my belt, I couldn't stop my mouth from taking over.

Me:  "Interesting."
Jay, "Yeah, we're gonna get married soon as she's divorced but the court wont give her a divorce.  Been trying for three years. Judge must not believe in divorce."
Me:  "Judge know you knocked up someone else's wife?"
Jay:   "Yeah and we live together and the husband lives with someone too."
Me:   "You break up their marriage?"

And shockingly, instead of Jay telling me to mind my own business, we had a long boring talk about the judge and how he kept putting stipulations on the unhappily married couple.  Good news for Jay, or so he thought, the judge was retiring in a month so Jay was pretty sure he'd be able to marry soon.

Now if that wasn't a bucket full of drama with a side of complications, I don't know what is.  Pretty glad my table only consists of a main course of boring with a side of over the hill.


When Jenn started pniching her face (which is Jenn's way of indicating she's had too many drinks) we decided to call it a night and made our way back to the B&B.

Travel has a way of reminding you what's important.  It's not the food and the scenery (although those are a bonus) but instead it's the people.  The stories.  The way strangers open up and share things.  The way everyone suffers and survives.  Take Jay.  Below the surface, past the drama and complications (many of their own making) there stands a boy in love with a girl.  And that's adorable.  Just freaking adorable.  And that's a nightmare all by itself.