Today we left the hotel early and headed toward Alabama…our goal was to go through Alabama and arrive in Biloxi, MS in time for some gambling and BBQ.  Not much to see along our route and thankfully, there were no historical things that Jenn just couldn’t pass by.  It helped that Ms.  Jenn was slightly hung over from a night of sipping martini’s that tasted like candy bars.  Note to self:  If it’s too good to be true, it is.


We made it to Montgomery, AL and stopped at a great place called Southern Comfort BBQ.   Jenn keeps protesting about the amount of meat she’s eating yet she ordered the pulled pork sandwich.  That thing probably had about half a pound of beautiful pork on it.  I ordered the ribs and despite them being a bit overdone (which I’m sure is difficult to avoid when cooking in mass production), the food was worth the trip.  Jenn and I both highly recommend the potatoes and white gravy…yumalicious. 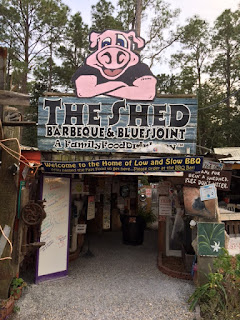 We decided to push forward and through Alabama and around 5 pm we made it to Mississippi.   Thanks to Jenn’s great planning we stopped for a quick taste at a special bbq place called The Shed BBQ.   I like to point out that I would have stopped anyway if she wouldn’t have planned the trip since they had billboards up 50 miles out with fair warning that the place was at exit 57.  But, one person’s precisely planned trip is another person’s fate.   Now, be warned.   This is not the place you want to bring your future in laws if you are trying to impress upon them your maturity or your excellent taste in BBQ locations.  It is, however, the place to go if you want to explore, satisfy your bbq taste buds, and even listen to great music. It was difficult for me to find the entrance and in fact, a rather embarrassed man opened the door on my head, which clued me in that there was a door.   I’m very smart.   Seriously, this place is a long, winding hot mess.   It is reportedly made of all recycled materials that have been haphazardly placed to design a long, awkward maze of style and grace.  You’ll quickly find that yes, it is a modge podge of various artifacts held together with nails, glue, and probably duct tape.  But what’s inside this monstrosity really matters.  And what’s inside is what you come for.  There is a small area of wooden decking in the “store” area where shirts, hats, rubs, sauces, glasses, and everything else you can imagine lies in wait for the overzealous consumer (that would be me).   Once you order, you walk (carefully as to avoid the bicycle wheels, license plates, shot glasses, boar’s heads and hanging t-shirts) to an inside eating area that consists of painted picnic tables arranged on gravel flooring.  Yes, I said it, gravel.   There are so many pieces of, well, for lack of a better word, crap, in this place that you could literally return day after day for the next ten years and find something new each and every time.  It’s a scavenger hunter’s dream combined with eclectic tastes and some of the very best brisket I’ve had this entire trip.  But the brisket is just the tip of the pig, I mean, cow.  (And brisket isn’t on the tip of the cow either, just sayin).  We ordered some appetizer that resembled a hush puppy that was filled with cream cheese, peppers, corn and some other magical spices.  This was amazeballs.   That was not the name, but it should be.  (The Shed, feel free to use this name and just pay me a small dividend.)

Finished the night at Harrah's in Biloxi,  honestly, I wasn't sure if Jenn was ever coming back.  She went down with 100 bucks and three hours later I hadn't seen her.  I started to wonder if she had been kidnapped by rowdy 90 year olds or if she was on a winning streak.

My winning streak was brief.  It entailed about 20 bucks and 15 minutes at the Walking Dead slot machine.  I won big (that would be $27 bucks) then lost the 27 plus most my original 20 within about five minutes.  In the elevator on the way back to the hotel, alone, cold, tired, and wet (ok, just tired), I held the remaining change in the palm of my hand, showing the man in the elevator my spoils.  He said, “Look on the bright side, you really only lost roughly $19.75.” Then he skipped out of the elevator with a smile on his face.  Yeah, laugh it up, old man, laugh it up.
- October 29, 2016