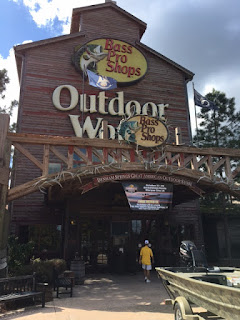 Jenn returned to the room late with no millions.  The next morning we hit the road and headed to St. Francisville, LA.   What was there?  Haunted plantation of course.  But, prior to getting there, we had to pass a Bass Pro Shops.   When I travel I stop at almost every Bass Pro Shop and or Cabelas that I see.  Apparently, Jenn does not.  Upon walking up to the doors, Jenn's first comment was, "Are you kidding me?"  She was obviously impressed.  More so when I took her upstairs and showed her the shooting range.  I was talking it up since Jenn is totally voting the wrong way, I figured she'd have a problem shooting even a toy gun.  I told her I took a gun on vacation with me every time we've traveled and she had a little baby calf running around until I said, well, if you're opposed I can go ahead and save only myself if necessary.  After talking to people about the dangers of travel, she decided a gun was fine.   I'm still only saving myself.


Anyway, Jenn is the pool shark of target shooting.  She kicked my butt (and right now, after reading this, her head is so big that I'm sure she's going to have difficulty getting back into the car to move hotels).   And although I beat her score once, she kicked my butt three out of four times.  All I can say in my defense, because YES, it matters, is that I'm the one packing the Glock.  I'm sure if I handed it to her she'd pee.  Or she'd throw it at the person and run.

I shopped at Bass Pro while Jenn walked around and looked bored.  Now she knows what I feel like at all these historical sites.  I didn't dilly dally as long as I would have had I been alone, and before I knew it, we were back on the road to our night's accommodations.

We headed to Myrtles Plantation for a night of ghost hunting and scary stories.   Horray!  Another plantation!


Myrtles Plantation is either the most haunted place in Louisiana, the most haunted place in the USA or not haunted at all.  Depends on who or what you believe.  We stayed in the Caretakers Cottage which was a very cute stand alone cottage that sits behind and to the side of the main house.  Story has it on the front porch you can hear the old caretaker walking back and forth at night.  So of course, I let Jenn have the bed near the front porch, door, and window.  I pretty much wanted to ensure Jenn experienced the best possible haunting and frankly, there was a back door I planned on running out screaming if needed.

Dinner was at the Plantation at the Carriage House Restaurant with turtle soup.  As darkness approached, we started walking around the grounds looking for ghosts and trying not to die of a heart attack.  I took the below photo when it was pitch black outside.  It clearly shows a man hanging from a tree...or a piece of Spanish Moss that was closer to my flash.


After our scary walk we went back to the Caretakers Cottage and used the EMF readers to check out whether we would sleep that night.  The EMF reader was on my bed and kept going off as I was watching videos about the Plantation.  That seemed weird.  So finally I broke the cardinal rule of ghost hunting (at least when you aren't being filmed for a TV show) and I started asking the spirits questions.

Since I was on a roll, I started asking other questions and Jenn pointed out it wasn't a magic 8 ball.  Whatever.  After getting the answers I wanted, I drifted off to sleep without an issue.  Jenn on the other hand ended up staying up until around 2 am hearing steps on the front porch.  Better her than me.