Late start again.  I don't recall breakfast...but afterwards we went back to Market Street area and went our separate ways.  Jenn wanted to see more houses and I wanted to see ANYTHING but more houses.  So she skipped off on her merry way and I went directly to a church, St. Phillips, to try to sneak in and get saved.  We have seen more churches on our travel than anything else, and these folks must be very religious or very hypocritical.  Needless to say, God saw me coming and the preacher made sure to tell me the church was closed before I got all the way up the steps.  If that's not a sign, I don't know what is.

Preacher said I could still go into the graveyard, which again, may speak volumes for what God thinks about me, but I couldn't pass up the opportunity to be in another old graveyard.  One thing to take note of:  squirrels.  They are the devil's rodents.  They were hiding in trees and bushes and making all kinds of racket at the most scariest of times.  Seriously, at one point I wondered if the walking dead were pushing themselves out of graves.  Almost peed.    Once I figured out it was squirrels, I put on a brave face, wiped my tears and kept going.  That was one of the times I wished God was on my side.  For shizzle. 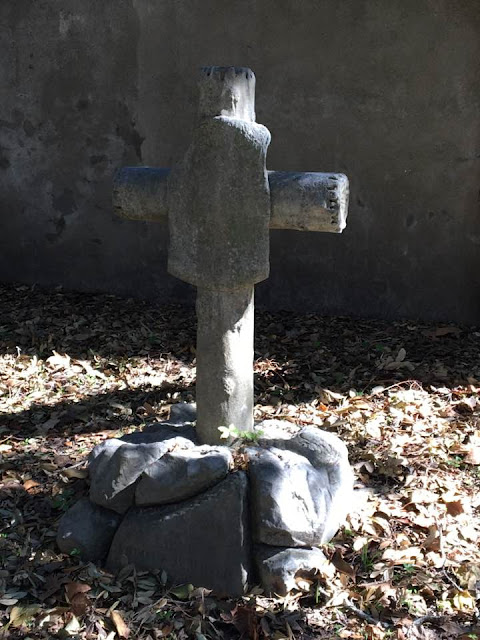 I love graveyards.  I like to walk through slowly, reading names...because I firmly believe as long as someone's name is remembered, they are remembered. And truly, that's the most we can all hope to accomplish...to be remembered...even if by strangers. 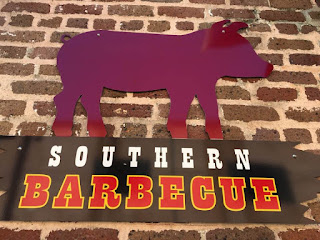 I overheard a tour guide talking about good food at the exit to the graveyard...but didn't quite hear where...so I put on my stalker *cough* investigator hat, and followed the foursome that DID hear the directions.  It would have been much easier just to ask, but I like a challenge.  What I did not know was that the wayward travelers had obviously been married for a long time and were used to, shall I say, discussing things.  Loudly.  In an almost argumentative way.  (Yet another reason I'm not married...of course, that and because I haven't found the right drunk guy.)    I had to turn away and walk different directions at times to keep my cover...but eventually I saw them head toward a seafood place on the wharf.  But, as I glanced sideways I noted a BBQ place, so I cut off my surveillance and ended up at the best place I've been so far in the south for  BBQ,  Cumberland Smokehouse.   I slinked to the bar and texted Jenn, telling her I was taking a food break.  She met me there, under protest, and we consumed the most delicious duck fat fries covered in pulled pork and cheese.  Great stuff.  Seriously, I had planned on hanging out there all day but eventually, I got up and went off to find another adventure. 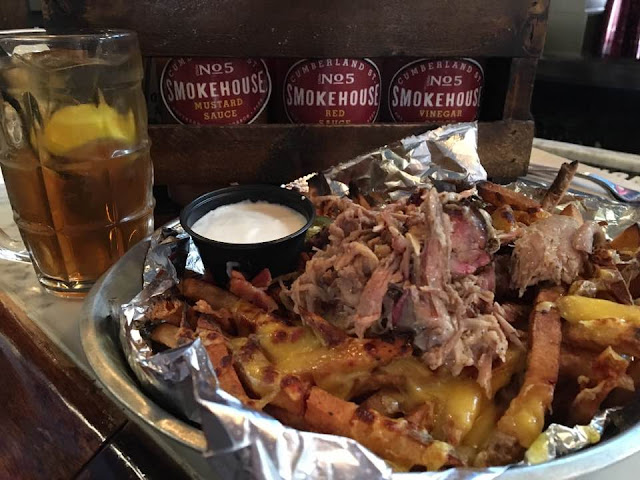 So what do you do in Charleston when you have nothing but time on your hands, why stop and talk to strangers, of course.  Along my travels I hung out with a Canadian who was on a bus tour with about 30 other folks.  As you can imagine, he was NOT a youngster.  I saw him sitting all alone by the courthouse steps so I sat next to him and we talked American politics (he says we're all screwed, just for the record), about his wife, his job as an engineer in Norway (before Canada), and about young folks and how disrespectful they are.  You know you've reached adulthood when you can talk to an 80 something stranger and relate to everything they say.   Damn.

Eventually, Jenn grew tired of old houses (for the day) and we hung out at a restaurant until time for our evening tour.  We toured a haunted jail.  Scary right?   Let me just say we survived, but there was one little tourist who almost didn't.  Initially we were waiting for the tour when this kid, maybe 8-10 (I'm terrible with kid ages) is sitting near us with his mom.  He was playing with his phone and something didn't work and the kid says, "Jesus Christ!"   Ok, maybe it's St. Phillip's fault for being closed and all, but I'm guessing this little brat says that kind of inflammatory shit all the time (get it, inflammatory shit, how inflammatory!).  Later, his Mom told him to stop messing around and then she looks at everyone and says, "Jesus!"  So I'm pretty sure the apple is not far from the tree...and in fact, maybe hasn't fallen at all.

I didn't let the kid bother me because I have a higher kid tolerance level than Jenn.  If you know Travel Buddy Jenn (which I'm sure you can call her), she gets very...hmm...what's the best word....enraged? at children.  There was a moment when I actually felt sorry for the little punk and I kept an eye on Jenn to make sure a "ghost" didn't push the little jerk down the stairs.   It could have happened.

Great tour, terrific tour guide.  Seriously, this guy was pretty darn good.  But, the best was yet to come.  We rushed back to our home for the night and watched the season premier of Walking Dead.  It was Jenn's first episode ever...and she liked it so much she said something like, "This probably wasn't the best episode for you to have me watch if you want me to ever watch it again."  So, Jenn isn't too into the Walking Dead. But, as I keep telling her, it may save her life one day, you know, when the zombies come.

Off to Savannah, GA by way of Hilton Head, SC.