On this glorious vacation day we ate a pretty crappy breakfast at the hotel and then took a bus to the hop on hop off tour start.  After much deliberation, we opted to try this since I am lazy.  I figured a 90 minute tour of the area and then unlimited on and off privileges would be stellar.

For all you movie buffs, apparently the movie Midnight in the Garden of Good and Evil was filmed here.  As was Forrest Gump, Forces of Nature, and Something to Talk About.   Both the tours we took here talked a lot about Midnight in the Garden and apparently, prior to that movie, you could purchase a home for little to nothing.  So thanks movie fans.  Really appreciate it.   I certainly can't afford to move here now.


For lunch we stopped at The Pirates House and had a cheeseburger and a catfish sammy.  The cheeseburger was thick, juicy, and topped with pimento cheese.  Fabulous!  Jenn and I ordered a pirate drink and snagged an awesome pirate mug...you know, so when I'm at work, sitting at my desk, thinking about my future I can look at the mug and smash it against my...wait, I mean, so I can remember how much fun vacation was.   Nice, strong drink.  Cheesy mug.  That's what vacation is about.  That and listening to Jenn as she worries about everything from bug bites to my driving.  And I'm a perfect driver.  Not one accident yet.  Sure, a lot of near misses.  But not one recordable accident.


After food, we got back on the trolley and headed to a church.  I'm not usually allowed in churches (something about spontaneous combustion) but since the trolley driver said they let anyone in, I assumed I'd be safe.  And safe, I was.  I didn't stand too close to the open flames although I did tempt fate enough to take a photo.  This was a Catholic church called
Cathedral of St. John the Baptist.  This place was so beautiful.  It made me want to convert.  Then I realized there was still time for me to catch fire, so I snapped some more photos of the beautiful windows (yea, I know, probably sacrilegious) and we took off to see a haunted house.  Wouldn't want that goodness from the Church to sink in. 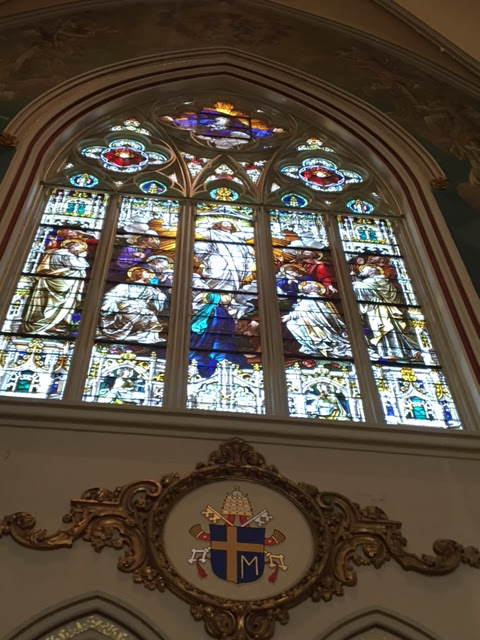 We toured the haunted and historic Sorrel Weed House.  This place has a great story behind it.  Most recently, it was a house above and store below.  The current owner bought it and ripped all that storefront crap out and was beginning to restore the home...when he found some hidden gems.  First he found a draft of Robert E. Lee's surrender letter (which is probably worth more than ALL of my possessions) and a parlor glass and decanter set, that was hidden in the ceiling.  Just goes to show you, make sure you look UP as well as DOWN.   This house has a sad story about a woman who walked in on her cheating husband and then somehow ended up either being thrown or jumping to her death off the balcony.  If that would have been my husband, HE would have gone over the balcony.   The slave girl who was sleeping with the hubby apparently killed herself a few weeks later in the house.  Sad stuff.  Moral of the story:  don't cheat.  Or get caught.  Or kill yourself.

After 7 hours of touring around the historic area of Savannah, I was more than done.  I dumped Jenn after the haunted tour and took off back to the hotel.   I ended up eating a great meal the The Olde Pink House.  That place had a great drink called the Pink Lady.  It's raspberry Absolute vodka and lemonade.  Afterwards, we met up again and Jenn went to the Olde Pink House and had some fried thing.  Then I went back to the hotel since I'm older and wiser than Jenn.

Jenn.  Poor Poor Jenn.  She wanted to try a place called Jen's and Friends Bar where they apparently make martinis like rice crispy treat, smores, snickers...you get the idea...candy like.   Jenn didn't come crawling into the hotel room until after midnight and when she did, she just repeated herself over and over.  It went something like this: